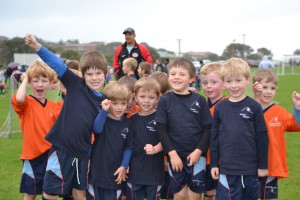 Like Peter Allen sang, “… my-oh-me-oh we’re going to Rio”… de Janeiro for the 2014 FIFA World Cup, and in downtown Port Elliot they couldn’t be happier.

According to Quentin Munro, who is president of the local club Southern Breakers, the Federation International de Football Association’s 2010 World Cup in South Africa prompted a sudden boost in kids wanting to play football – they refer to it as the ‘world game’ and most Australians call it soccer – and already some are coming out to training decked in their Socceroos green & gold gear in support of their new campaign.

They’re talking about our captain Lucas Neill, how many goals Tim Cahill is going to score, and Sir Josh Kennedy, and while Quentin is naturally pleased with the revived enthusiasm leading up to the World Cup in Brazil from June 12-July 13, 2014, he says the most important thing is that children are keen to play sport.

“The Socceroos have had a big impact on the kids in our local competition; for sure,” Quentin said. “The last World Cup was a huge boost for us because all of a sudden there was more interest in the game.

“We’re starting to see a few more kids out here in their Aussie tops and talking about the players because it’s on the telly. It has to lift the profile of soccer in the area.

“But the greatest thing is that it is encouraging children to play sport – regardless of what sport.

“For us it’s about getting them out there on the pitch playing small-sided games having a bit of fun. We’re so lucky that we have parents who want to help; some may not know the

game well but they’re happy to help organise or coach a team to allow the kids to have a run-around and be active. That’s great. It’s all about fun.”