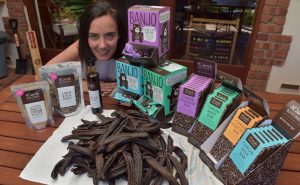 Unashamed chocoholics of this world will be salivating once they get through the first few paragraphs of this story. It’s about a carob farm.
We’re not talking about their Willy Wonka imaginary world with the ghost of actor Gene Wilder hiding behind chocolate trees and chocolate tractors by the chocolate house and sheds, but something incredibly tasty and far healthier.
Aahhrr! the older generation screams. It was the bitter stuff that their mothers and their mothers forced into kids as a substitute for the supermarket sugar bombs disguised as chocolate. Carob is still regarded by some people as being awful.
But something amazing is happening, and right in our backyard at a carob farm in Port Elliot. Sophie Richards, who has a most impressive CV filled with marketing and product development skills, particularly in the wine industry, spent 12 months developing a recipe that turns the carob pods into a naturally-sweetened delight. It’s sensational.
So good, in fact, that the family business DC&S Solomon – David Solomon, a retired GP, his wife, Carol, and their daughter Sophie – now produce a pure range including a syrup, raw and a roasted powder, chomped carob pods called Kibble Nibbles on which you cannot stop munching, and carob bars and funny little Banjo Bears under one brand – The Carob Kitchen.
Through sheer hard work, amazing innovation and courage, this business with 3500 carob trees across 80 acres is the second-largest carob producing operation in the southern hemisphere.
The Carob Kitchen products are now being sold throughout Australia and exported to New Zealand, United Kingdom and Japan. The United States of America market is within grasp where a new-world of carob has even been accepted by President Trump because we’re not talking about fake chocolate of the olden days. They are a real treat in their own right.
There is no business here capable of producing the commercial range, so the carob is milled and made interstate. Cocoa butter is used instead of palm oil, there is a new focus on consistently buying Australian certified organic milk solids (which is safer than imported products), and while The Carob Kitchen variety has no added sugar the products contains natural sugar as with fruit.
For diabetics, it is considerably better than regular chocolate. The carob also has the chemical pinitol, an anti-diabetic agent or a natural insulin mimicker, and early evidence suggests it helps the metabolism of sugar in the muscle and red blood cells.
This family has a marvellous story of achievement, yet relatively few people seem to know this farm exists, let alone what a carob is. Yet, not for one moment do David, Carol and Sophie turn to those who in the embryonic days said they were “consumed by madness” and laugh back at them.
“They were right at the time,” David says with a degree of humbleness.
“It started out as a long-term investment in 1996, buying the property and not expecting a return from the carob trees for 10 or 12 years.
“It all had to do with the influence by our brother-in-law (Andrew Gebhardt) who had carob trees growing wild in the Burra Creek in Burra, and he thought he could do something with the beans.
“But sadly, when Andrew died (in 2005), and our beans were coming on, we were left high and dry. The beans were initially stored in the shed for two or three years until we called called a family meeting of the four daughters and sons-in-law to decide what to do.”
Sophie said there is little monetary value on the actual carob pods – they need to be value-added – and at the time the only use for what was left in the shed was as cattle feed. “We even sold some as dog food to someone in Melbourne,” she said.
“Not a lot of people grow carobs… they ask how long before you get anything back – it’s eight years minimum before you get a reasonable crop.”
With this shed full of brown pods, and things being grim, the family turned to Sophie with her marketing and product development ability to create a value-added product.

After 12 months of testing recipes she came up with the formula to again harvest the carob trees for their intended purpose – as a delicicous replacement for cocoa powder.
“It comes back to our recipe and the varieties mum and dad have selected to grow for eating, not just for the seed (inside of the pod),” Sophie said. “Our variety is sweeter, and have a lot more taste. Then there is the manufacturing side; how you roast and mill the pod and turn it to powder and what we add – or don’t add. We use as few ingredients as possible so you can taste the flavour of the carob itself.”
David gave up his Adelaide suburban general practice and two weekly rounds of golf as part of a last-ditch attempt to make this carob venture work. The first planting of 100 carobs was in 1996, and the work hasn’t stopped.
Carol related how their friends thought they were crazy. “They said you’re just hobby farming and you’ve got no idea what you are doing,” she said. “As David said earlier, they were right.
“But we were very fortunate to have Ray Irvine, a local builder and farmer who has continued to help us in lots of ways. He helped us graft all the trees, cutting the top off in a V-shape. We had a 10 per cent take, which was really disappointing. We’d stand there in the paddocks and think, gosh what are we doing?”
The family also turned to two chaps in Broken Hill, who owned the Shell Service station and got tired of being held up every other weekend so they went into growing carobs and grafted them at bench height.
“To germinate a carob in a pot is easy; to graft them in a pot and make them take is terribly difficult,” David said. “The best take was five per cent. But Andrew cracked the code and he was getting a 90 per cent take.
“And with Soph having a background in wine marketing, she built our whole business up by growing the carob trees and moving the pods and kibble on to be value added.”
Of course, selling a new product is not easy. Come rain or hail in the winter, and through the scorching days of summer, Sophie was at the local farmers markets in Willunga. Given the nature of the people in the village, it came as no surprise when other stall holders, and locals in general, helped her as much as possible. “The moral support was incredible,” she said.
There were also the early Sunday treks to the market at the Wayville Showgrounds, and like a Trojan on a mission she visited health shops, key Foodland and IGA outlets and other wonderful places like Veg Out who give small businesses a real go. From there the little Banjo Bears and bars took off interstate and overseas.
Importantly, this whole venture would not have been possible without the support of the entire family, including Sophie’s three sisters and their families.
With a tone of deep respect he rated his late brother-in-law as the King of Carobs. Now he says Sophie is the Queen, and why not, she has played a huge role in saving the family business and put Port Elliot on the international map even though few locals may be aware of this operation.
Along the way the traditional carob growers in Spain with their industry having 4000 years behind them have followed revolutionary methods at our Port Elliot farm, including Sophie’s own technique to roast the kibble without burning it. But her sensational recipe turning sour pods into ‘gold’ will stay here forever.
The plan was to watch the trees grow, instead the family business has been at the forefront of industry change.
David said the venture started as an investment, but along the way discovered there was a fine line between being courageous and stupid. What got him on the better plane, he likes to think, was the finest ingredient in Sophie’s secret recipe – passion.
At this special place overlooking Horseshoe Bay the only hint of Willy Wonka and his chocolate comes with the colour of the farm dogs, old Boysa and the energetic pup Queenie. And it doesn’t take long to learn to love them either.

You may purchase The Carob Kitchen range at Veg Out, the health food shop in Victor Central Shopping Centre, Foodland Goolwa, IGA stores in Victor Harbor and Port Elliot, and the Farm Shop, Goolwa. You may also buy online: www.thecarobkitchen.com.au