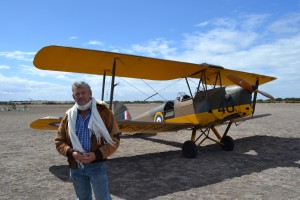 Organisations that continuously strive to honour those who have served,including the dear fallen, gathered in a privately-owned hangar on Hindmarsh Island last Sunday week to plot their greatest tribute ever.

Also present were owner/pilots of classic Tiger Moth bi-planes who will do a fly over the Anzac Day parade in King Williams Street, Adelaide, on April 25, including Barry Hills, who hosted this special gathering. Another local bi-plane owner/pilot Steve Johnson was there too, and equally proud among this flying group were Mike Hannell and others.

Adding to the historic military transport were some magnificent war-time jeeps, and those who had meticulously restored or cared for them.

Part of their mission this day was to continue their admirable effort by organising another fly-past of old World War II aircraft and assemble even more old military vehicles to carry the veterans through the streets of Adelaide.

The meeting was also organised to plan our commemoration of the 2015 centenary of the beginning of World War 1, plus a special convoy by the RACT, which will celebrate its 40th anniversary on June 13-14, from Adelaide to Port Lincoln and another fly-past by the Tiger Moths. Overall, the celebrations have a very strong Goolwa or Hindmarsh Island link.

“I have a place down here and I noticed Barry flying every weekend,” Bill said. “Before long he started gathering his mates to do a fly-past on Anzac Day using local old military aircraft. They timed themselves to fly past the saluting dais just as the RAAF passed the Governor, which is timely fashion indeed. The pilots leading that group may have learnt in the very aircraft above them.

“We have done that for three years, and we met today to also talk about how we could do something even more special for the centenary commemoration.

“The Military Vehicle Preservation Society people also support Anzac Day by providing vehicles for the older fellows, particularly World War II men and women who are unable march, but can be carried in an old army vehicle. In the old days they used to be in white Veterans Affairs Department cars, which was effective but not with much character. The old fellows love it because they can get into a jeep. They may be looked after in old artillery vehicles that are now privately owned, with some here in Goolwa. That’s fantastic.”

Tim Hanna said the cooperation between the RSL and all of the relevant groups was outstanding. “This meeting was very much in the spirit of Anzac Day,” he said.