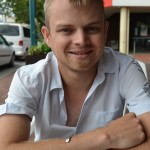 Cory Henderson is like a lot of lads. He wants to do an apprenticeship, possibly in the electrical field, see Las Vegas, New York and catch a NBL game – definitely the LA Lakers – and maybe in a few years put a deposit on a house.

At 27, he’s not really a lad anymore, but he feels like he’s about to go through his teenage years all over again. A sufferer of cystic fibrosis – or CF as they call it – Cory had a lung transplant on November 30, and according to his gifted surgeons and other medical staff, the operation could not have gone better. Now he’s ready to start living as if there really is no tomorrow.

Of course, he has his restrictions, and there are still issues to get through like taking 60 tablets a day to help his serious stomach problems and continue the fight against transplant rejection. Basically, his DNA wants to kill-off the new lungs, so his immune system needs to be low to a concerning level to help things settle. Fortunately, nothing seems insurmountable; he can win this game in extra time and enjoy a far better quality of life.

Cory, who lives at McCracken, has always taken a positive outlook, highlighted by the tattoo on his back: Carpe Diem… Latin for Seize the Moment, which remarkably was later used by the Cystic Fibrosis Australia as its theme.

Family and friends say he’s never complained about his condition. All his life mucus has gone through his bloodstream, and blocked ducts – especially in the lungs causing infection and ultimately serious deterioration.

Getting to his current destination definitely has had its dark turns, but Cory wanted to go over the trail to tell the many other CF sufferers it’s not always about doom.

“My first admission to hospital came at three months old, and I didn’t have another until I was three,” Corey said. “At four, I knew I was different. From there I went into hospital every two or three years, then every year and last year up to five times a year. My lung capacity went from 100 per cent to 28.

“I wasn’t really frightened; I always thought I’d be okay; just a stumbling block if you like. The drugs and antibiotics got better and the medical profession has learned more… I wasn’t supposed to see my 21st birthday so it was special for my mum and dad (Mick and Sue) when I did, and then the life expectancy went to the late 20s. Now it’s 37. You live in hope because you can see the fundraising they do go into research, and you see the impact first hand.

“Because we are living longer we are experiencing different issues, but you just cope with them. I have always considered that I have been lucky with it; I haven’t been too bad compared with others with CF, and I wasn’t in hospital almost all the time like some when I was younger.

“I knew it was terminal from when I was 10, but you learn at a young age to get just on with it. A friend of mine, Sarah, who was a year older than me, passed away when she was 14, and that set me back, but you can’t show that.

“When I grew up in Gladstone I had two lives or two sets of friends; those at school and those I saw in hospital. I thought that was good, but since 2006 it has been pretty rough; I’ve seen nine of my hospital friends go.

“All the times I went into hospital not once did I think ‘this is it’. You know you are going to get the best possible treatment; you just don’t think about it. My survival instinct has always been positive.

“Sure, every now and then I have a downer, but overall I am mentally strong, whereas some others struggle. I can understand that.”

A mate of Cory’s has been on the transplant waiting list for more than two years, but he’s still doing fine, so when a nurse from Prince Alfred Hospital in Melbourne contacted Cory after just three and a half weeks to say there may be a suitable donor, it came as a shock.

“I thought, this is it; I don’t want to go,” Cory said. “It was just overwhelming, and of course, I was glad I did go.

“We were home, and about quarter to seven on a Thursday night, the 29th of November, and we were just about to go out for dad’s birthday. The next thing this bloke named Jamie rang and said they might have some lungs for me. I went as white as a ghost. I was told to pack a bag and leave in 15 minutes. All I was told was that the donor was a girl, and she was younger than me.

“We got tor Adelaide Airport, went straight to the Royal Flying Doctor Service, and I was in the air at 8.20. We got an ambulance from Essendon Airport to the hospital, and while I was being prepped the doctors were waiting on two vital factors relating to the other lungs; they were a perfect match.

“There are a lot of cases whereby the recipient is there all ready to go, and it is called off at the last second because it is not quite a match. It was an unbelieveable feeling when I heard, ‘it’s all go’. Yes, I was scared, but it was all happening so quickly.

“I had the operation at 12.30 their time. It usually takes five hours; mine took three and a half; it went that well.

“I don’t know the girl’s name because of ethical reasons. I am able to send her family a letter, but with no name, telling them how I am going. It is not easy to say in words just how I feel; I am just so incredibly grateful.

“We will never know each other, but if it were possible I would like to meet the family to thank them personally and somehow say what it means to me. I feel for them; their loss, and how hard it must have been for them to make their decision.

“It is so surreal knowing I have someone else’s lungs. Some get depression after a transplant, but I feel good; I really do. I know I have been given my big chance in life, and I guess with it I have a responsibility to take care of myself.

“Sometimes I have woken in the morning thinking this could be my last day, but ever since that night of the operation I have been waking up thinking this is my first. I don’t know what I will do now; I just know I have a good life to lead and I want to be the best I can for everyone who has helped me along all these years, especially the young girl and her family.

“This hasn’t just been about me. I don’t say a lot, you know… the personal stuff, but I don’t think I could ever thank my parents enough. To go through what they have, and do what they have done for me, is just incredible. I know my brother and sister (Shannon and Kirsty) have been through a lot too, but we don’t talk about that either.

“There have been a lot of people over the years who have been good to me; like the people in Gladstone, and the people at the footy club (Victor Harbor). I have worked for Geoff McRostie (doing print finishing work at SA Design & Print, the printer of Coast Lines) for almost six years, and we have been through a lot together.

“I managed the shop in Whyalla for Geoff… he knew the risks, but he took me on. It wasn’t easy for everyone, what with me not being well. Each time I got worse the oxygen wouldn’t get to my brain so I’d forget things. I’d put something down and a minute later I would not know where.”

Geoff said Cory’s attention to detail, his work ethic and eagerness to learn had always been incredible. “In all the time I have known him I have never heard him complain, and I doubt whether anyone else has,” he said.

“We knew that Cory had cystic fibrosis, but to be honest we never really knew anything about it. This has been a real learning curve. He’s had a huge impact on this place; we are all better people for knowing Cory. He’s an incredible lad.”

Cory played football in Gladstone to the best of his ability until he was 17, did a double diploma in event management and sport and recreation, and has been respected by everyone at the Victor Harbor Football Club having served on the committee and produced a weekly match guide. This obvious determination suggests he will do an apprenticeship and rock Vegas.

Somewhere along this remarkable journey someone forget to tell him his life was going to be too short to be such an achiever. Well, Cory Hennessy has beaten the odds. His new life turns 100 days on Sunday, and now he’s got the capacity to blow every one of the candles out. Happy birthday mate.

If you would like more information on organ and tissue donating, and cystic fibrosis, or would like to make a donation to help these great causes, please visit: