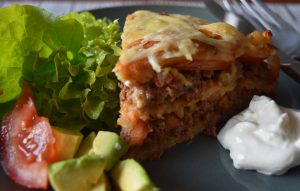 Heat oil in a saucepan over medium heat. Add minced beef and cook until browned. Stir in taco seasoning mix and water, and simmer for five minutes over low heat. Remove from heat.

Place cooked brown rice and ¼ cup milk in a saucepan, and cook over low heat until milk is absorbed, stirring occasionally. Remove from heat.

To make pancakes, heat some of the extra oil in a small, round frying pan. Pour or spoon enough pancake mixture into pan to cover base. Cook one side over medium heat until base is browned, and the pancake is cooked through. Slide an egg slice under the pancake to loosen it from the pan, then flip it over and cook other side. Pancake should be about 8-10cm in diameter.

Place pancake on prepared tray. Top with some of the minced beef mixture, sliced tomato and grated cheese. Cook another pancake and repeat layering, finishing with a pancake on top, covered with a sprinkling of cheese.

Bake at 200ºC for 10 minutes, or until cheese has melted and is golden. To serve, cut into wedges. Very tasty served with salad, and a dob of sour cream.

Hint: Sometimes the pancakes might break a little when turning in the pan. Ensuring the pancake is cooked through before turning will help stop this from happening.