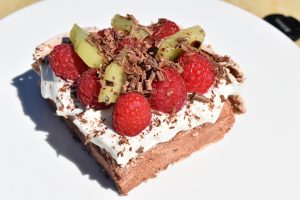 In a clean, dry bowl whip egg whites with electric mixer on medium speed, until soft peaks form. Gradually add sugar about a tablespoon at a time, continuing to beat on high speed until all sugar has been added. Continue beating until mixture is stiff and glossy, and all sugar has

and cocoa powder to egg whites.

With the mixer on its lowest speed, continue to mix for about 15-30 seconds, or until just

blended – do not over-mix.

tray to form a round or rectangular shape, ensuring it is about 7cm high, as it will spread slightly during baking. Raise up the edges a little to allow for filling. P{lace pavlova in the oven. Reduce oven to 120ºC and and bake for 1 hour, then turn off the heat and allow pavlova to cool in the oven. Pavlova can be stored in an airtight container. To serve, whip cream, adding a teaspoon of icing sugar and a few drops of vanilla essence. towards the end whipping. Spread over the top of the pavlova, and top with fruit of choice – e.g. raspberries, strawberries, kiwi fruit, peaches, bananas – and sprinkle with grated chocolate (dark, milk or white).

Note: It is preferable to use the ‘bake’ oven program if you have one, rather than fan force. If using fan force, reduce the above temperatures in this recipe by about 20ºC.The outside of the pavlova will be soft when baking time has ended, but it will become crisp as it cools, whilst the centre should be of marshmallow texture. If using small eggs, use 5 egg whites. For a bigger pavlova, just double the recipe.