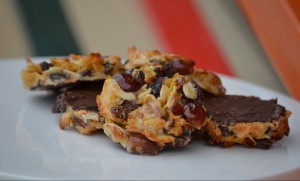 Pre-heat oven to 170ºC. Line a baking tray with baking paper. Spread flaked almonds over tray and lightly toast in oven for about 5 minutes, or until slightly golden. Remove from oven.

Place remaining ingredients in a large bowl, add toasted almonds and stir until combined. line two baking trays with baking paper. Make each Florentine by placing a 7cm scone cutter onto the prepared tray and pressing a dessertspoon or two of the mixture into the scone cutter. Alternatively place dessertspoons full of mixture to form mounds on the tray. Bake at 170ºC for 8-10 minutes, or until lightly golden on top. Remove from oven and allow to cool on tray for 10 minutes. Remove from tray.

Melt chocolate in a saucepan over very low heat on the stove top, stirring constantly, or in a suitable bowl in the microwave oven. It should be melted very gently – be careful not to ‘cook’ it. Spread melted chocolate over base of Florentines. When chocolate has set, store in a covered container in the refrigerator.