It will be 30 years ago next month that we watched Crocodile Dundee being held at knifepoint in New York, turning to his assailant and saying: “That’s not a knife.” And as this movie character draws his 16 inch Bowie knife, he adds: “That’s a knife!”

And when fate led to Mal Day making his own hunting and collectible knives shortly after, he was told those lines time after time. He still does, and he’s still asked to make a Michael Dundee replica knife that he hand forges and crafts in his back room workshop between Delamere and Cape Jervis.

Right now Mal, 67, is making one from spring steel for yet another client in Darwin who calls himself Mick Dundee, and he has made many for clients in the United States of America.

We are not talking about weaponry, but the sheer art of making all kinds of knives including carving knives from the finest quality tempered steel with the handles made from beautiful timber off-cuts and tree branches, or deer antlers gathered by members of the Deer Hunters Association for him in South East bushland.

Mal is an amazing craftsman of knives, a passion that started from his days as a diesel mechanic working at State Transport Authority depots around Adelaide.

“A friend of mine gave me a big heap of hacksaw blades to make gasket scrapers, and I had a lot of steel left over,” Mal said. “I went to give it back to him, and after saying he didn’t want it he suggested I made some knives out of the leftover bits. And so I did, and I have been making them ever since.

“For a while there I didn’t think anyone else was making knives like I was, until I walked into an Australian Knifemakers Guild convention in Adelaide in the late 80s and I was blown away.

“I became a very proud member of the guild, and there are more than 200 of us from around Australia. We come from all walks of life, and we have scientists, teachers you name it… it’s a really good community.

“We make every form of cutlery there is. We class it as functional art – it has got to look good and work well. You have your skinning knives, your hunting knives, filleting knives, your cooks and chefs knives, steaks knives, bread knives and on it goes, even your Alaskan ulu knives with a big curved blade with the handle at the top which the Eskimos use for everything. I love making tomahawks too (they are magnificent).

“The quality of a knife all depends on the materials… good steel, the fit and the finish.

“Nearly all of my hunting and collectible knives are made from spring steel and high carbon steel… the higher the carbon content the better you can treat the steel.

“I went through a stage of doing Indian-style knives forged from coil springs. I do all my own leather work. I use a lot of natural materials in the handles like deer antler, beef bone and that sort of thing.”

Mal and his wife Coralie, who have three children, 10 grandchildren and one great grandchild, ran a knife shop in Hahndorf for almost 13 years before retiring and moving close the Delamere six years ago. The problem was, Mal started sharpening knives for locals and the word got around about his sensational knives, and so the orders came flooding back again.

Many may see Mal’s passion for making knives as being on the edge of the ‘bad’ side – the criminal element, but he quickly defends everyone in the Australian Knifemakers Guild.

“In all the years Coralie and I have had knives we have never had any trouble whatsoever,” Mal said. “I have been to a few police seminars over the years where they have said 97 per cent of all the crimes committed with knives were from out of the kitchen. As far as hunting and collectable knives go, they have not been a big part of crime.

“I went to the seminars because of the new weapons laws that come in, and we keep up to date on what is allowed. I think that’s good; there needs to be control. The police are very good about the whole situation.”

You can find Mal at the Cape Jervis market on the second Sunday of the month from 9am-1pm. People drive from the other side of the globe to see him.

Mal admits making knives started out as a hobby, and the more he became involved it became a business. “But it has always been a passion,” he said. That’s him; the sort of bloke who always makes a point. 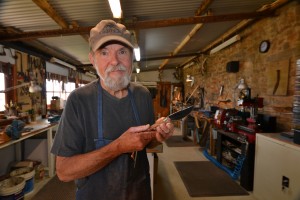