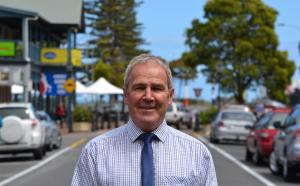 Alan Kluske (pictured right) believes in the message behind an old football fable about a country recruit who approaches the old doorman of his new league club in Adelaide and asks what the club is like.

The doorman smiles and asks in return: “What was the club like where you are from?”

The doorman says: “It’s much the same here.”

Minutes later, another recruit from the same country town arrives for the first time and also asks the doorman: “What is this club like?”

Again, the doorman smiles and asks in return: “What was the club like where you are from?”

The recruit says: “I loved it. We didn’t have a lot of success last season but the coach was developing the young players and they’ll improve. The committee is very supportive and overall there’s a great atmosphere within the club.”

And again, the doorman says: “It’s much the same here.”

It’s why Alan hates, with some passion, the suggestion Victor Harbor is “God’s waiting room”. He sees this town as a lovely little place, and he issues a warning; if you are dying of boredom then it’s your fault.

There are many who have lived here longer than Alan having come from Murray Bridge via Naracoorte in 1985, but he is certainly qualified to offer his view. He is, after all, Mr Menswear. Perhaps not quite in the super hero mould just yet, but being in his Ocean Street clothing shop with his wife, Bev, he meets the blokes of this town, and since Mr Menswear started cross-dressing by selling fashionable women’s clothing he gets a good insight to what our women are thinking too. That itself is globally unique.

Alan is also the president of Encounter Bay Rotary Club, has been on a zillion local street and business committees, coached the B-grade lads at Victor Harbor footy club to a flag in 1999, and like Max Bell around the corner it’s hard to find something that he hasn’t sponsored.

So when Alan, 67, says he loves this place you listen. Besides, he says, he’s not interested in people who cannot find time to see the positive things in life. “Sure, there are some things here that I would like to see change a little bit, but everyone says that about every town,” he said. “You go with the flow. There is not much that I don’t love about Victor Harbor.”

Alan started with the entry at Kleinig’s Hill: “It is a magic view from here and it varies every day. It’s priceless.” From the restaurant below the Bluff: “That’s as good as anywhere in the world, and it’s right on our doorstep. This is a pretty little place, and we are damn lucky.”

And Alan talks of the breathtaking first hole at the Victor Harbor Golf Club which in September won acclaim having been named by Australia’s premier golf magazine Australian Golf Digest in its Hall of Fame Awards for Iconic Australian Golf Holes. It looks over the town, and on the horizon you see Granite Island where the historic horse-drawn meets the old steam train engines on Australia’s first-ever passenger railway line to Port Elliot.

Such magnificence, as per the tourism brochures, and we can add the awards including Australia’s Tidiest Town 2013 and South Australia’s Best Main Street this year.

According to Alan, Victor Harbor has a heart of its own and it pounds pretty strongly. “I really like the community spirit in this town; it’s amazing,” he said.

“There are towns that have lost their hospital but no one is prepared to let that happen here. The number of people who get behind every fundraising event for the South Coast District Hospital is incredible, and because of that it provides an outstanding service to the community.

“Towns lose their cinema, but not here. People support it because it has amazing character and we appreciate what we have.

“We’ve got the biggest community art show in the southern hemisphere and it is very professionally done by the Rotary Club of Victor Harbor. How many country towns have two magnificent golf courses, two bowling clubs, two football, netball and cricket clubs, and two Rotary clubs? Not many.

“There are a lot of people who do a lot of service work and they do a fantastic job. There is healthy rivalry among the sporting clubs… you get banter to and fro at time to time, but you don’t get that in some towns; it becomes narky. Here, it’s a fun place.

“There is so much variance when it comes to sporting and leisure activity for all ages. We have the magnificent clean beaches around us for water sports, and great places to ride your bikes with a mixture of flat and hilly roads.

“Overall, we are just so lucky have what we have got, but it’s the strength of the community spirit that touches me most. You only need to look at the response of the town and the region to the burning down of the primary school a few weeks ago; it has been amazing. The generosity is huge.

“Sadly, we’re no different to any other town when it comes to accidents with young kids and we have lost a few. One was too many. The community rallies here too, but it’s something that is not really acknowledged because people never promote themselves about it; they do it for the right reasons. They just do it, and that shows the character of the town.

“We have all heard the ‘god’s waiting room’ bit, and people think that is funny. I don’t like it. A town is what you make it. People said that Naracoorte was a clicky place, but when we arrived and got involved with the community and we were prepared to go out and join in we found out what the locals were really like – and they were great. Victor Harbor is no different.”

From a personal point of view, Alan likes to think one of his finest achievements was being part of the Victor Harbor pageant committee that kept it going in 1988 when it looked like folding.

“The pageant was just a note in the local paper to say rock up at Eyre Tce and you are off and go,” Alan said.

“I spoke to Ian Warner and Bob Kay and a few of the other local traders here and we stirred it up a bit. Those were days when we didn’t know whether there would be six floats, 10 floats or 20 or none.

Our committee thought we should know who we were dealing with and we started a nomination form, which caused a stir.

“We also went through the trauma of shifting from Christmas Eve, mainly because we could not get bands to perform that night and there was no music; nothing, so we brought it forward. Gee, that got some reaction. The pageant is now a magnificent event and the town should be proud.”

When asked whether anything in particular had touched him personally Alan recalled the time in 1999 when the Victor Harbor Football Club held a club ball and the players had to wear a suit. “They made a big fuss about it because they said they’d never wear one again,” Alan recalled.

“Not long after an elderly person within the cub died, and as a mark of respect all of the players went to his funeral wearing their suit. Some never even knew the elderly gentleman.

“I thought that was pretty good, and while people talk about how Victor Harbor is full of old people they don’t know of the quality of our younger generation.

“To me, this was a reflection of when Peter Francis was principal of Victor Harbor High School (1995-2000). He turned the school around from where the kids didn’t want to go to school or learn, to wanting to be there and achieve. He was followed by Peter Manuel (2001-03) who continued that great communication with the students.

“I think it is why we are getting this flow on from today’s kids that there are other things in life and maybe we should be looking further ahead and be a bit more compassionate about what we do, whether it be schooling or with one another and things like that.

“The effort of these principals was a big turning point for Victor Harbor, and I don’t think it can be under-estimated. Now we have young people who also love this town.”