When goal shooter Di Johns shot another goal to set up a commanding lead over Myponga in the Great Southern Netball Association A-grade grand final there was a murmur around the crowded Myponga court, ‘Oh, Victor again.’

It became three premierships in five years, but later that night amidst the celebrations it was suggested that the players reflected that sport was not just about winning, but the journey. 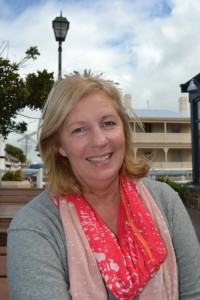 For these girls, it has been filled by emotion, and according to their coach Pauline Edwards (pictured), held together by a indelible bond of friendship.

During this domination Victor has lost only two games – the 2009 and ’12 grand finals – and the experience in ’09 formed the basis of their genuine belief that we must enjoy the moment because nothing lasts forever.

Pauline painfully recalled the morning of the 2009 grand final when she had to ring all of her players to tell them that the husband of one of their teammates and closest friends, Alison Golding, who had been standing out of the side because she was due to have a baby in six weeks, had been killed after being hit by a train at Port Elliot.

“We were all devastated,” Pauline recalled. “The girls came out to the game in the right spirit, but it was all too much.

“Everyone still feels it, and then we think how hard it has been for Ali. Our success hasn’t been about doing it for Ali, but a reminder that we have to move on to help her move on. I still tell the girls to just appreciate what they have in life, and they do.”

Ali returned to the club 18 months later and played several A2 games, but then moved to Adelaide.

Remarkably, Pauline first started coaching Victor Harbor 30 years ago, missing only two seasons because of commitments as an assistant coach to Marg Angove at the Adelaide Thunderbirds. Pauline, who also enjoyed success as a state player representing Black Forest in the once very strong SA Churches Association, has now coached Victor Harbor to seven A-grade premierships. However, she said the 2009 tragedy, and the regular 50-60 goal thrashings in her early coaching days at the club, were reminders that things can easily change. What is important, she says, is the journey itself, and while her team is excited about winning another premiership, it has never lost respect for its opposition or forgotten it is also only a game.

“What they have got is very rare,” Pauline said. “I tell them all the time; you need to play as long as you can because you may never experience this again.

“The team has continuously evolved with pregnancies, retirements or moving away, but the nucleus has remained. Those who have come in have been able to take on the desire and belief that has been instilled in the side, especially over the past seven years. They have stepped into the bond these girls have, which is really amazing. Off the court they are the best of friends.”

The development of juniors and the recruitment of Di, a former SA Sport Institute player from Naracoorte, in 1986, and later her friend, Alicia Montgomerie, led to Victor Harbor’s second GSNA premiership in 1987, and developing a nucleus of quality people on and off the court.

With humbleness, Pauline said she has enjoyed coaching hundreds of players during her time with Victor Harbor, and especially creating this current team and its values.

“I don’t take all the credit because the girls have done it; I have just guided them,” she said. “But to see such a work ethic makes me incredibly proud; to see them work as a team has been a real pleasure. I think that is what life is about; working with each other and being friends.

“I know that some coaches just go home after a game, but these girls have made me feel like one of the team players. Because it is so strong, it has made me appreciate team sport even more.

“You have your good moments and some bad days, but it is how you respond that matters.”

When talking of team triumphs obviously the premierships came to Pauline’s mind, but in regard to the personal moments she treasures as a coach she included after a game in round 14 this season when Victor Harbor beat Goolwa 110-10.

“We have beaten teams by a lot of goals, but it never feels like that many,” Pauline said. “It does when you are losing because, as I said, we have been there.

“This day the Goolwa girls played their hearts out; they never gave up. Their coach sought me out after the game, and thanked me and the team for playing the game in the manner in which we did; that we did not ridicule them. Her kind remarks meant a lot to me, and I felt that it was a reflection of what our girls are like, and just as importantly it showed the outstanding character of the Goolwa girls.

“It can be easy to get caught up in success – and don’t take me wrong, of course we are proud to have won some premierships – but for us, to share our incredibly strong friendship and morals is something very special; it runs deep. To also share respect with other clubs is what sport should be about.”