They gathered at monuments and placed wreaths, including those by schoolchildren.

Typically, there were huge gatherings at Victor Harbor and Goolwa, but this commemorative day, the 98th anniversary of the landing at Gallipoli, wasn’t about who drew the biggest or smallest crowd because each service was equally respectful and played an important role in delivering a message that we remember those who served, particularly the fallen.

The dawn service at Port Elliot (pictured) drew nearly 300 people, an outstanding reflection of the community, and as always it was special, and bigger than previous years. The spirit of Anzac Day was there, as it was across the Fleurieu and Kangaroo Island. 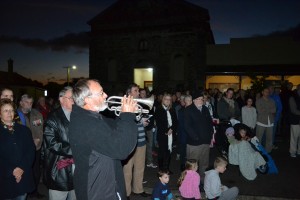 cal biplane enthusiast Barry Hills organising a fly-over of Tiger Moths in conjunction with the Anzac day committee, which met at his Hindmarsh Island home and airfield last month.

Many of the returned service men and women attended dawn services along the coast, and then travelled to Adelaide for the Anzac Day march. The veterans, especially those who served in World War II, have become fewer in numbers, but certainly not in their spirit for what this day means.