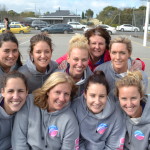 Oh hum. Victor Harbor is in another Great South Netball Association grand final, at McLaren Vale on Saturday week, and we can hear the murmurings from the masses that enough is enough; let somebody else win.

This makes it six successive grand finals. Amazingly, the girls have won 117 of their past 119 matches, which may be the most incredible current run around the asphalt courts across the state.

But while some may call for change, their coach Pauline Edwards reminds us the two losses were pretty big ones – the 2009 and ’12 grand finals. She recalls feeling as if every spectator in the association lined the court cheering against them in that 2012 final, and walking away thinking what had her team done to deserve the treatment.

Pauline now feels that experience made her take a step back and realise it was just the Aussie thing; supporting the under-dog, and she leaves no doubt that the GSNA A-grade coaches, and she is near certain their players too, are unreservedly good sports, which is an enormous compliment to the association.

“I think the sportsmanship comes with being successful for so long, and the fact we still respect the opposition every time they play them,” Pauline said. “We never take a game as if it’s a walk in the park. We don’t mess around with our team in regard to placements and changes or anything like that.

“The simple fact is, we are not disrespectful to clubs that have struggled because we have been in that position ourselves. We have gone through the hard times. It is easy for any club to forget where it has come from and get a bit cocky when it wins, but I have always drummed into our players they need to be respectful.

“The big wheel turns, you know. You only need one good player to come into a town and you start building a team around her. Others want to join the team because it is getting better.

“Look at Shane Nethercott, who played all of her netball at Langhorne Creek and then joined Strathalbyn. Just one girl has made a big difference, and the next year we can expect Strath to build on that again and be that much harder to beat. That’s basically what happened to us; there has never been a big secret to the success we have had so far; we just got the right players at the right time and we built a team around that.

“I am very proud of the girls; they are a wonderful bunch. They are good friends, and they are great for the club too. They are very club minded and across all the leagues in the state that is not always the case. They would not have lasted that long either if they weren’t club minded. These girls love country netball.”

Pauline has coached Victor Harbor for eight seasons, and admitted in recent years there was the occasional thought whether it was time to move on.

“I have been at Victor for a long time now, coaching the A-grade and you would think they would need something fresh by now, but these girls make me stay,” Pauline said.

“There have been different combinations, but there has been a core group. Some have come and gone and come back again with babies. Now they come as a family and everyone looks after the little ones.

“The other thing that has become special about it all is that the girls probably won’t continue for too much longer.

“After so long they are not any younger either. Alicia and Di are the only ones who have stayed on this journey the whole time. There are only two mums in the team – Emma and Sarah – and others have changed for whatever reason.”

Pauline is obviously thrilled to be in the grand final – against the winner of Saturday’s preliminary final between Strathalbyn and Myponga at Encounter Bay – but again looks to 2009 and ’12 and reminds herself no final is easy.

The message to her players will be simple; enjoy the moment. “I tell them that all the time,” Pauline said.

“It is a special group they belong to. It’s like all good teams; it’s special and not everyone gets that opportunity. They are all mates and it’s an amazing combination, but it won’t be there forever. They need to enjoy every moment.”

Australia has enjoyed phenomenal success in both men’s and women’s hockey at Olympic Games and World Cup level, and after winning gold medals at the recent Glasgow Commonwealth Games we thought there might be fans waiving their sticks at the Victor Harbor club’s fields by the roundabout at the end of Ring Road.

But no, not even a good ’ol hockey one, hockey two routine. The reality is, most people walking down Ocean Street may not know the nickname of Australia’s men’s and women’s teams, let alone their captains.

Our local hockey is also playing its finals this month, and the Victor Harbor Hockey Club is in a good position to take both the men’s and women’s titles. However, more than anything club president Liz Richter (pictured) hopes Australia’s recent hockey gold medal haul encourages someone new to the game to come out and have a look and watch the best sides on the day win whoever they made be.

“As a hockey person it frustrates me a lot that our sport does not get as much coverage as the traditional winter sports,” Liz said. “We have been winning gold medals for a lot of years. We have always had good hockey teams in Australia, and I don’t know why hockey is not better promoted as a result.

“If other sports were as successful at world level as hockey I am sure there would have been a huge increase in participation numbers.

“A lot of people think hockey is dangerous, but it’s not because it is umpired well. There are actually few injuries.”

Our South Coast Hockey Association has only four clubs – Aldinga Bay, Goolwa, Victor Harbor and Yankalilla – but between them there are 32 teams from under 13s under 16s, and men’s and women’s seniors – plus the skills development Minkey program for children aged 5-8. And the great thing, from a parent’s point of view who may run from here and there dropping off their son at one place and their daughter at another, the hockey junior teams are mixed.

“We have teenage girls who are as good and perhaps have better skills at this stage as some of the boys out here,” Liz said. “Honestly, we don’t have that drama out here about girls versus boys.

“I think the mixed competition scares some girls, but there is certainly no need. In hockey, size does not matter; the biggest kids aren’t necessarily the best.

“Hockey is a skilful game. It is quite technical, and I like that. There is a lot of running as well. To me, the biggest thing is that it is a good team game and I really enjoy playing with the team.

“I have played it since I was in Ascot Park Primary school as an eight-year-old kid. My dad (the late Colin Harding) was a hockey player, manager and coach of state teams, and an Australian tournament director.”

Rest assured, Colin would be proud of his granddaughter Madison, 14, playing hockey for the juniors in the morning and alongside her mum in the seniors in the afternoon, and four-year-old Billy having a good hit with his hockey stick in the family backyard – just as he would be of Ella, 11, who plays netball.

The Victor Harbor club probably gives its sponsors bigger coverage than most with their signs splattered along the fencing by the round-about at the end of Ring Road, by the Encounter Bay Football Club.

The club teas after home games are not to be missed, especially the yiros and pasta nights. You are welcome. You’re also invited to watch the semi-finals at Goolwa Oval on Saturday, the preliminary finals at Yankalilla on September 13, and the grand finals at the Victor Harbor fields on Saturday, September 20.

And for the record, our Commonwealth Games hockey women changed their uniform from shorts and T-shirts to sexier hugging outfits much like our netballers to add a bit more appeal to the image of the game. For some, the skill of the game is not enough.

Anyway, time is up: the names and captains of Australia’s men’s and women’s hockey teams? Mark Knowles is captain of the Kookaburras and Madonna Blyth is captain of our Hockeyroos. Being great Aussie sports fans, we all knew that. 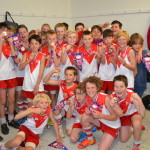 They were only under 12, but the lads sang and cheered their hearts out after beating Goolwa-Port Elliot in then GSFL Mini Colt Carnival at Victor Harbor Oval early Sunday morning while the rest of the town slept.

It wasn’t just the way they won, but how the sportsmanlike manner in which they handled the 19-point victory with coach Darren Austin encouraging his players and later acknowledging the great effort in defeat by the Magpies.

Meanwhile, the GSFL A-grade finals series got hotter with Goolwa-Port Elliot, in its first finals appearance in 10 years, crunching Willunga by 54 points in the elimination final, to earn the right to play Strathalbyn in the first semi-final at Yankalilla on Sunday. Langhorne Creek caused an upset by beating Strathalbyn by seven points in the qualifying final, with the Hawks now taking on minor premier Encounter Bay in the second semi-final at Strathalbyn on Saturday.

The preliminary final will be played at Willunga on Saturday, September 13, and the grand final at Myponga the following Saturday.

It has already been big September for Encounter Bay, the reigning premier, with Rigby Barnes winning the A-grade best & fairest medal and Tom Bloomfield the B-grade medal. The Eagles also won the GSFL Shield for being the best-performed club over the four grades.

However, along this journey to the third Saturday it is difficult to imagine any of the remaining hopefuls in the four grades singing their club song with more gusto than the under-12 Willunga lads did in the changerooms after winning last Sunday morning. That’s what premierships are about; no matter the grade the winners sing as hard as they just played