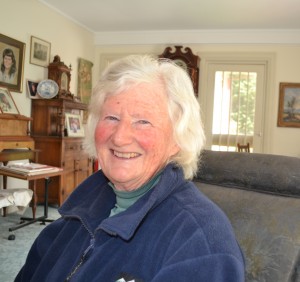 Charlotte Morley easily befriends you with her natural charm and honesty, indeed the quaintness of once being a self-confessed Port Magpies fanatic in her younger days and now enduring football frustration as a Crows fan.

It confirms her admission of having a ‘mind of her own’. Maybe it comes from her great-grandfather Sir John Langdon Bonython, the sole proprietor of The Advertiser 1893-1929, her grandfather Hugh Trevanion Bonython, who was an editor at this former broadsheet, or perhaps her father, Eric Glenie Bonython, whom she obviously adored and delivered her a fascinating insight into stock farming.

After discarding an arts degree course at university and fearing her destiny was children, cleaning and gardening, Charlotte is a self-taught sheep farmer at her Illawong Texel Lamb establishment, off Range Road, Parawa, about 35km outside of Victor Harbor. But don’t believe for one second that she follows other lamb producers like sheep.

For starters, she is no big rap for sheep dogs. “You don’t hunt sheep, you guide them,” Charlotte insists. “You might have to stand for three minutes while they decide whether to go through the gate, but they eventually do. The kelpies have too much yippee bean.”

However, it is her unshakable belief that her Texel stock, derived from the Isle of Texel, Holland, more than 500 years ago, is way ahead in her preference to John Macarthur’s merino, which has been acclaimed for carrying this country that really sets her apart. And proudly.

Having bred eight varieties, challenged her market with the same cuts of meat and come up with the same conclusive answers, Charlotte admits bewilderment with other Texel breeders in Australia for being incredibly slow at pushing Texel lamb in the market.

Along with running Texels Charlotte has introduced South African Dohnes, which have finer micron wool and good meat proportions in their loin and rump. “Crossing the Dohne and Texel gives you wool you can use and make money out of along with a descent bit of meat to eat,” Charlotte said.

“The difference between South Africans and us is they have more brains. Australia has had merinos for more than 200 years. We have black sheep, we still have stupid sheep, and sheep with all those wrinkles around the bum which causes fly strike and all the rest of it.

“The South Africans crossed Peppin-type Merino ewes and German mutton Merino rams to produce the Dohne a long time ago. Basically they eliminated black wool, wild sheep and got intelligent sheep with a decent-sized loin and backside on them, and decreased the micron of the wool (diameter of wool fibre) well below anything the Australians have done. Why didn’t we do it? We are lazy; we just don’t bother. We say, ‘what my grandfather did will do me’, but life doesn’t work like that.”

We told you she had a mind of her own, but it’s really about her amazing passion for her Texel breed.

Charlotte is 72, but you would not guess it by the fact that for the past 43 years she has worked from daylight to dark ignoring her arthritic joints and especially her troublesome back courtesy of a skiing accident during her uni days.

A mother of two, and long-divorced, she is entrenched in genetics, not so much sheep-wise – she leaves that to breeding program manager Ross Hamilton – but as clues for being whom we are and for what we stand. She has a distinctive trait of kindness from her dear father, Eric, who was orphaned at four when his parents died within three weeks of each other and was raised by his grandparents. Eric stammered, believed to be due to cruel torment from a school master at Queen’s College. It is this genetic trail to being someone who appreciates the moment, and sees the beauty across her property from her kitchen sink while some may only notice the dishes, that also makes her special.

The family was only here at Illawong for three years when her father died in 1971, aged 60, and with much humbleness she spoke of her need to listen and learn to run the 1600 acre property. She now has 3000 breeding ewes, plus another 1000 comprising of ewe lambs, lambs for sale, rams lambs or rams.

“One of the things my father said was, ‘oh it’s a lovely place, but I would not send my worst enemy to live here’,” Charlotte recalled. “It was not developed in those days. I remember having a kerosene pack on my back and we would kill yakkas; squirt them down the middle, to clear the property. I was 16.

“I have always loved the land; I really have, and farming is in my blood. I feel the older you get on the land the more you understand about life and people, and all sorts of things. I have never considered it as a lonely lifestyle. You can be a gregarious person… my dad was quite happy to be a hermit, and I certainly am too. I am quite happy to be here by myself and with my sheep.

“I always want to learn. When I came here I had three aims; I wanted to produce the best lambs you could, I wanted to beat Jack Biddle (local farmer) who had the most lambs and got the most at the Dublin sales for them, and I wanted a pat on the back from the Stock Journal. I got all three, even though it took me the year before last to get that pat on the back.

“I have needed to learn how to run the property since 1979, and I guess it has always been a struggle. I can still remember my father saying, ‘the place doesn’t pay us anything yet but it will soon’. He said I needed to buy some more land if I could, and I did; that’s when we started to make a profit.

“It’s been easier to be in a man’s world the last few years than it was to begin with. I found it frustrating when I heard people say, ‘she’s a woman; she doesn’t know anything’. But I learned and listened, and I could say, ‘you don’t know what you are talking about’.

“Yes, there have been tough times, but I have never wanted to give up because I love the land. I listen to Macca on a Sunday morning from half-past five to ten o’clock (Australia All Over show on ABC radio) and I learn so much about what is going on everywhere.”

With a few tears Charlotte recalled that when she was seven or eight years old on the property at Bugle Ranges there were always lambs who died after being marked. She buried each one in a special plot and planted a cross that she made. Some of the lambs didn’t have their mums, so she hand-fed them, and many of those died too.

“It taught me that where there is life there is death. I can eat lamb but I don’t really think about where it has come from. Pigs go to market, cows go to market, sheep go to market and occasionally a fox gets the chooks; That’s just the way it is – that’s life.”

But without doubt, her toughest day is taking her lambs to be slaughtered at Normanville. “I guide them down to the ramp by myself and they go on quietly,” Charlotte said. “No dogs.

“Yes, I love my sheep, and yes, I feel it when they go to market. There are also times when we seem to get quite a lot of wether lambs. I am feeding three right now, and I think, ‘oh, look at you, you are such tenacious little boys so what am I going to do?’ They are really useless; the wool is not much good either. That’s farming. I’m not sure whether I am supposed to get emotional, but I do. It must be my genetics.”