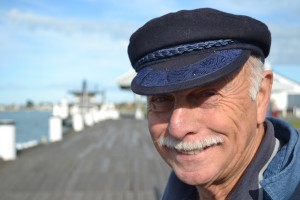 Ask a man how long does it take to repair his wooden boat and he’ll say you never finish. Ask Roly Bartlett, revered by many as our nearest relative to the proverbial Old Man River, when did we learn all of the history on the River Port of Goolwa’s once-thriving boatbuilding industry, and he says we haven’t.

“It goes on forever,” he adds with a grin highlighting his wind-struck facial lines that seems hereditary in these parts.

With some glee, Roly revealed it was only a few weeks ago that he and fellow Friends of the Oscar W group discovered Goolwa had a steam crane to unload at the docks. Perhaps not out of the ordinary to some, but for these volunteers an exciting sense of discovery. It became more enthralling when they learned the crane didn’t work most of the time, causing frustration because unloading was incredibly slow. They used just two hand cranes to off-load goods, and then on to steam trains that were part of Australia’s first-ever railway line, between Port Elliot and Goolwa.

Roly, 77, said the fact-finding mission was a subtle reminder there was still so much to learn about our heritage; not a history recital, but an opportunity to add to a seemingly never-ending story that we can all share.

“It’s important for Goolwa,” he said. “Our schoolchildren need to be aware so they can tell their grandchildren. I don’t think Goolwa gets the recognition it deserves, and compared with some other places I don’t think we are doing anywhere near enough to make our history known.”

His own idyllic journey as a first-year high school student at Strathalbyn helping his grandfather John Jackling repair a hole-ridden boat that couldn’t be used during war time because there was no petrol, to building a dinghy, a 16ft clinker boat Christened Tubby, and other lone ventures like restoring an old mail boat operated by Miss Saunders at Woods Point, created amazing challenges as a young man. 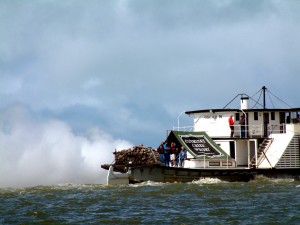 However, Roly said that while his life story surrounding boats, indeed the history of his Jackling English forefathers who built a boat upon arriving in 1854 remained a personal special branch, it was nowhere near as important as his passion for Goolwa’s heritage tree that we could all share.

With enormous pride, Roly said a significant turn in his life was when he successfully applied for a teaching appointment in tech studies at Victor Harbor High in 1984. “Eventually I got too involved in things to have time to go to school,” he quipped.

“My passion for paddle steamers coincided with the development of Signal Point by the Goolwa Wharf as Australia’s 1988 Bicentenary was approaching. I became part of the Signal Point support group, which decided to invest in the steam-powered barge Dart, the last major vessel built at Goolwa in 1914 and rests below the bridge today. It was always thought the ship building industry stopped here in 1913, but again recent research has shown it was a year later.

“It was also a time when the Signal Point board, with Tom Chapman as chairman, was responsible for bringing the Oscar W here from a slip at Murray Bridge, thanks to financial support from Tourism SA and especially the Signal Point group. The Oskar W had big holes in her side, the steam engine wasn’t functioning and there were plenty of other things in need of repair. We lost count how much it cost to fix, but we went to then Premier John Bannon with a price of $200,000 just to get it steamworthy, and 12 months later the Oscar W reached Goolwa where it was fully restored.

“It was all starting to take shape and the wharf was extended to cater for the Oscar W. I also became involved in the Armfield Slip (short distance from the wharf), which was part of the whole scene, and formed another group. We had no money, so we organised a ‘sail past’ of boats as part of the opening of Signal Point, which raised some funds.”

The sail-past was the start of the South Australian Wooden Boat Festival, and another 12 biennial festivals later it has become a magnificent event on South Australia’s tourism calendar. The Oscar W soon became surveyed meaning it could carry passengers, Roly became entrenched running the Friends of Oscar W group, and eventually the project was owned by the Alexandrina Council.

The group is close to completing a DVD highlighting boatbuilding in Goolwa between 1853-1913 (should now be 1914) revealing absorbing tales of adventure, indeed the fortitude behind the 61 boats attributed to being built in Goolwa. Of them, 37 were paddle steamers. Importantly, some like the PS Cato and PS Providence had engines, boilers, winches and hulls completely made in Goolwa.

“There were other boats or steamers brought here in parts and then re-built. In 1854 Captain Francis Cadell as part of a deal with the state government, had two other steamers built by Napier & Sons, a shipbuilding company in Scotland – the Albury and the Gundagai – and brought them here in pieces to Port Elliot by wind jammer,” Roly said.

“Unloading them at Port Elliot was said to be hopeless because of the small jetty. Somehow they put the pieces, including big boilers, on to a horsedrawn railway and took them to Goolwa. Cadell also brought 30 blokes from Scotland, including George Bain Johnson, who became a well-known river boat captain (buried at Currency Creek Cemetery).

“There was a huge shipbuilding industry going on here… more than one boat a year from 1853-1914. Plus we had more than 2500 boat movements on the wharf from 1853-1890, so in those pioneering days it was busy. According to the newspaper, The Argus, on any given day there were two or three boats unloading on the wharf.”

Roly said our local history was constantly being discovered, offering reflections of challenges, heartbreaks and triumphs. “I am never surprised to learn something new,” he said.

“I was speaking at a local Probus club meeting recently and a gentleman in the group said his neighbour dug up a piece of cast iron in his back yard that had the words ‘Goolwa Foundry’ on the back. That was the first time we he had heard of a foundry here, and we further studied a wood-cut etching done by a bloke named Clint in 1868 of Goolwa looking from Hindmarsh Island and it showed a 30ft high chimney where the foundry must have been.”

According to Roly, the history of Goolwa and its surrounds offers stories of adventure that should capture the imagination of everyone, and would love them to be part of history lessons at primary schools.

“We can talk about how in 1853 the Lieutenant-Governor of South Australia, Sir Henry Young, was convinced that the Murray River was Australia’s Mississippi, and could be a trade route for New South Wales, Victoria and South Australia,” Roly said. “There was a prize of £2000 offered to the captains of the first boats to travel by boat from the River Port of Goolwa to the Darling River junction, and it became a great race between Captain Francis Cadell in his paddle steamer, the Lady Augusta, and William Randell and his Mary Ann.

“Francis Cadell took the prize, but it was the adventure and the importance of the event that needs to be learned. To me, this brings our local history to life.

“There are so many other stories, including what happened to vessels like the PS Canberra, which was the last steamer made here in 1913. They are all part of our heritage, and it is why I would love this town to always be referred to as the River Port of Goolwa… it says what we were about.”

Roly, however, is merely one of the many in this town who cares about its past. He would have made an outstanding history teacher, but then he says with tech studies there was always the opportunity to do history through practice; doing the hands-on bit by making things the same way they did in the olden days.

He doesn’t want anything from our past lost, including the not-so glorious days when this once thriving town began to slow down with the old railway line diverted to Morgan in 1878, and the boatbuilding industry declining causing riverboat companies to amalgamate and ultimately disappearing in the early 1900s. Perhaps gone, but in Roly’s eyes, never forgotten.

“I am proud of what I have done,” Roly said. “I would like to be remembered as someone who cared about our history. It has given me a lot of enjoyment; it can be the same for everyone.”