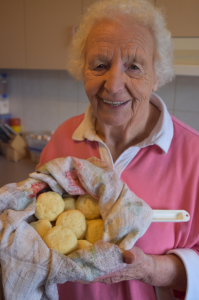 Meet Jan White (pictured right), by the Grace of Cooking of this Realm, Her Royal Highness the Queen of Scones, Head of the Country Shows and the Defender of the Cutter in her Kingdom of Perfect Rounds.

Forgive all of this trumpeting nonsense, but Jan, a lovely 78-year-old who learnt how to make scones from her dear Grandma Emma Sands, a scone judge at the first-ever Pinnaroo Show in 1916, really is a cut above the rest.

Maybe not as well known as the late Lady Bjelke-Petersen and her famous pumpkin scones, and not yet a national winner, but when it comes to supporting our regional country shows and having five scrapbooks of certificates and ribbons telling us her scones are absolutely scrumptious, our Jan is a real gem.

Jan has been entering scones in countless shows around the state since 1951 when she was a winner in Grade 7 at Black Forest Primary School, and is a seven-time Southern Agricultural Show Society winner involving aggregate results from its seven-member show associations in Murray Bridge, Yankalilla-Rapid Bay-Myponga, Strathalbyn, Port Elliot, Coonalpyn, Callington and Uraidla-Summertown.

And with the 139th Port Elliot Show looming, off Cameron St on the weekend of October 7-8, Jan is excited again at just being able to enter her scones. It’s not about winning, she says, just being part of a wonderful show and catching up with great friends from afar, maybe some from Jabuk on the Pinnaroo line where she lived on a wheat and sheep farm with her late husband Lynn for most her life.

A former school headmistress, Jan also learned the secrets of scone success from her mum, Margaret Rumball, but this century-plus family tradition is close to breaking the link as Jan and Lynn had four boys – even though one is a chef.

The Port Elliot Show, which also incorporates Victor Harbor, Mount Compass, Middleton, Currency Creek and Goolwa, is also part of the annual Laucke and CWA Scone Mix Competition, with the winner having a cook-off with their savoury scones against other regional winners leading to the state title which carries $200 prizemoney.

Jan has been a finalist in the state award, and was applauded as grand champion at the 2015 Strathalbyn Show. She has been equally thrilled to win prizes at shows for her cream puffs, fruit cakes, pickles ‘n jams, photos and even her Angora goat.

“All of the shows are special in their own way, and I have no doubt that just entering something brings a tremendous sense of satisfaction for everyone,” Jan said. “I was once the knitting steward at the Coonalpyn Show, and the contestants were like everyone else; just excited to feel a real part of the show. That is the most important thing.

“I have always loved cooking. With my husband and four boys on the farm you’ve got to.”

And Jan’s secret to her success in the Kingdom of Scones?

“For normal scones I just use self raising flour, cream and buttermilk,” she said. “Use a table knife to mix, and don’t knead too much. Make sure the dough is soft, not dry.

“Put the scone cutter straight down, but don’t turn it; this way the scones come out nice and upright; they’re not twisted. Put them fairly close together in a hot oven at 200 C for 10-12 minutes, and when you take them out put them in a tea towel in a bowl and cover to allow them to steam for one or two minutes.”

There you go; scones fit for royalty. Of course, there have been failures, like when Jan was a youngster and entered pasties in the Pinnaroo Show. She left them in the oven too long so she scraped the burnt parts off the bottom with a knife. Judge Grandma was mortified.

Jan says it reminds us to add the other ingredient in everything we cook – enjoyment.