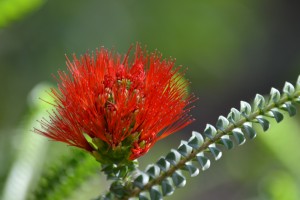 You’re excused for not recognising the plant pictured right; a Beaufortia Squarrosa, a West Australian native with its stunning red flowers. It was captured in Nangawooka, an Aboriginal name for Place of Springs, at the Waterport Road turn off on Adelaide Road, Victor Harbor.

You can be also forgiven for not noticing this five-acre flora park because the site is perhaps best known for the graffiti on the adjacent water pumping station. It can be like life, really; looking at the obvious negative rather than the beauty that lay behind.

Don Overall, 79, understands such similarity given the fact that, since 2007, he has endured two brain hemorrhages and confronted cancer, yet he dwells only on what maintains his amazing enthusiasm to defy the setbacks – the joys of life that he sees through the plants and the birdlife they attract at Nangawooka.

Incredibly, Don has been coming here twice a week for 32 years as a foundation member and now president of the Friends of Nangawooka, where last October his equally strong passion for birdlife spanning more than 50 years was also recognised with the naming of a bird hide in his honour.

With strength in his voice, Don said that few could imagine what this place has meant to him. “Nangawooka has taken my mind off a lot of things,” he said. “Having had two brain hemorrhages means I have lost my licence because of peripheral sight loss, and it’s meant I have had to appeal to people to bring me out here every week.”

He only mentioned it to highlight the character of his friends here, particularly the group’s vice-president Bruce Williams, and his wife, Helen. Between all three they have been the current driving force of the development of Nangawooka, symbolising the spirit of environmentalists, which goes hand-in-hand with our heritage – ’tis the Australian way.

Don is also quick to acknowledge the Zonta Club of Fleurieu Peninsula committee in 1982 consisting of Margaret Stevens, Jenny Cannon, Barbara Parsons and Pat England, who invited him, as a memeber of the Southern Field Naturalists, to be part of the first Nangawooka committee.

“Native plants were always a hobby for me,” Don explained. “I stuck with it, right from when I was a tot… five or six years old. My dad, who was an undertaker here for 42 years, planted 14 flowering gums alongside his house, and as a boy with imagination I’d stick his tommy axe in my belt and guard these trees to stop people picking the flowers off. (He didn’t give his dad any new customers).

“I planted 100 flowering gums along Inman River when I was a young teenager, but only two of them survived… the flood of ’49 got one and the highways workers got the other when they widened the road.”

Don’s trail of trees has continued across Victor Harbor ever since, at kindergartens, schools and churches – he even led groups of senior scouts up The Bluff to a National Trust block to plant them. Some say the tally is well into many thousands; he shrugs it off saying he’s just one of many who have contributed to the Society for Growing Australian Plants, which in 1984 became the Australian Plant Society Fleurieu Group.

Importantly, Don, a cabinetmaker by trade, also applauds the Victor Harbor district of Zonta, a global organisation with 1200 clubs in 65 countries consisting of women in business and the professions working together to advance the status of women through service and advocacy.

“The Fleurieu Zontians had the vision that led to the Nangawooka concept,” Don said. “In 1982 they invited me to go on a committee to find a place for the Year of the Tree; they wanted to put some natives and it was suggested we plant trees from the turn-off to Port Elliot down to the Hindmarsh Valley turnoff. That would have been too hard to maintain, so they suggested this place which was ideally situated; it was a cow paddock.

“The plants have given me a lot of pleasure over the years; it really has been really good therapy. It gets you out in the bush, and the reserve has attracted a healthy bird life too… we have 1250 plant species of 250 genera, and 85 bird species on the list.”

Don pays much credit to Bruce, largely because of his landscaping expertise and enthusiam, and Helen with her irrigation and planting. They, and up to a dozen other volunteers on a good day, meet every Thursday from 9.30am-midday to put Nangawooka in shape. Bruce says it’s not easy when someone drops a trailer load of rubbish by the front gate the night before a recent open day. “We rang the council and sure enough they helped us out again,” he adds. “Their cooperation and enthusiasm helps us go on.

“We have to be frugal. We do fundraising to make this place go ahead, and we are constantly replacing plants and keeping up to date with name tags for the plants, which people like so they can identify and plant them at home. The cooperation of service clubs and the support from the council gardener is outstanding; it gives everyone a huge lift knowing the supprt is there.

“We’re having another open day in September, and hopefully we can sell some more plants that we have propagated to help us with the funds we need to survive.

“There’s something special about this place. Like Don, the passion for plants has been there since I was a little kid; I remember converting one of my dad’s aviaries into a potting shed and a greenhouse when I was nine.”

After years of refusing to look at the graffiti on the water pump station on his way to his highly-successful nursery in the Adelaide Hills or his city-based landscaping business, in 2009 Bruce discovered Nangawooka and became involved.

“First it was the plants, and then it was the friendship that got me back here every week,” Bruce said. “It would be nice to see more people come along on a Thursday morning; they can just turn up or give me a call on 8552 7220. Everyone is welcome here; there is no age barrier. We all do what we can, even if it means calling in and pulling out a few weeds; no effort is too small.”

Don said one of the great things about this place was that schoolchildren regularly came here looking at nature and leaving thinking how they could lesson our footprint on the planet Earth.

“It’s what Nangawooka does to you,” he said. “It helps you see the beauty this world has to offer.” CL