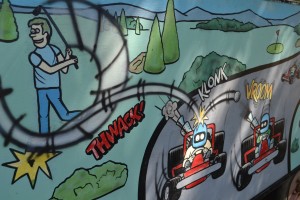 Megan Whibley smiles at the notion her kids, Gidget, eight, and seven-year-old twins, Tess and Charlie, drop her off at the playground on the way to school and tell her to have a good time.

Their innocence suggests they believe work is peddling a paddle boat, dodging other go-karts or struggling to find her way out of a maze before reaching her tether and climbing the wall as some mums tend to do.

But they have no ordinary mum. Meg, as she is affectionately known, is manager and a director of Greenhills Adventure Park, and one day the kids will discover life is not always fun and games, and not necessarily on a slide. Most of all, that nothing is forever.

Greenhills, which is celebrating its 30th year, was bought by a developer four years ago and is expected to be turned into a housing estate within another four or five years, depending on market trends.

“That’s life,” Meg (pictured) says. “Puzzle Park is no longer there at Murray Bridge; Lakeside Leisure which was half way to Victor has gone. They are all sites engulfed by housing.”

Losing her dear brother, Scott, to cancer aged 43 almost 10 years ago is her constant reminder to live for the day. His amazing contribution to the park, for their mum and dad, Bill and Marg McKenzie as part of a family business, is all around her, evidence that this has never been about money but the profound satisfaction of experiencing and sharing a beautiful family adventure.

When the day eventually comes that the gates are shut Bill and Marg will be able to reflect and say that selling their cropping farm wedged between Owen and Hamley Bridge in our Mid-North and developing a business with Tom and Rosemary Builder, who created the marvellous concept of Greenhills in 1982, really was an incredible achievement.

Buying the whole business a year later, and in 2009 selling to a developer who leased the park back to Meg, has added to the ebs and flows, but perhaps only when this phase ends will we actually realise what an asset Greenhills Adventure Park has been to Victor Harbor and its surrounds. It’s like a lot of things; taken for granted and only missed when it is no longer there.

Meg leaves no doubt that her reward has always been watching every-day families come to Greenhills and experience a great time. Some suggest the $35 entry fee is a bit steep, but eventually they realise the memories are forever, and is worth every cent.

“The beautiful thing about Greenhills is that it’s a big day out for the whole family, and you cannot say that about a lot of places these days,” Meg said.

“I feel good when I see families together. For many, it’s not always like that. It’s the most beautiful sight; everyone there at a bench or sitting on the lawns with their lunch and an Esky and sharing a laugh.

“A family may come here once a year, maybe twice. It’s like going to the Royal Adelaide Show where you don’t go every day. And it’s not just for families either; last weekend we had three groups of about eight 20-year-olds having the time of their life and respecting the family environment.”

Above everything, Meg said she and her family, with incredible support from husband Paul, a builder by trade, had always felt good about the real stand-out in terms of what Greenhills had done for Victor – the number of people it has employed, mostly casual.

“It is difficult to put a figure on this, but it would be well over 1000 people,” Meg said. “They start working here as young as 14, and some may stay for seven years while they do uni. Then off they go; it is amazing watching their progress, and we care about them.

“The amount of staff we need to have on the park each day during the summer seems to increase every year to meet insurance obligations. More and more things need to be manned or watched. I have 80 on the books every day over the summer. A lot out will yell out ‘hello’ or re-introduce themselves in the street saying they had worked here 20 years ago. Now they bring their own children here. Our third generation of visitors is coming through.

“There are special days in your life, and one of the big ones for me is the last day of the summer holidays when we get all the staff together and have a pizza night. We give out funny awards for the things that have happened during the year, like someone falling in the water, and the 80 people, of different ages, backgrounds and interests in life, all sharing a laugh.

“It tells you something about the special people here, like our full-time staff Peter Thurnam, who has done maintenance here for 14 years, Craig Littlely, 18, a groundsman for 18, Natalie Quigley, here for almost 10 and Danielle Egerton. I like to think we’re like a big family having a great time in the park.”

Meg was 16 when her parents opened Greenhills, which then featured just a water slide and mini-golf, with food sold from a caravan. She always thought it was cool having the park to herself after school. Today there are 18 fabulous activities including wall climbing under supervision, archery and par-3 golf for people of all ages. It can be a place for having fun with your kids rather than just watching them.

Overall, it costs $1.3 million to operate Greenhills per annum, but again Meg doesn’t complain or believe her business is worse off than others; she simply moves on. She sees the bigger picture, as she does with her $60,000 annual advertising account in the city to lure tourists to her park with huge off-spin in benefits to other local traders.

One day, when the surveyors are followed by a fleet of earthmovers, the day-trippers from the city will sit at home thinking what else is there at Victor besides Granite Island and the Bluff. As locals, we may ponder what if far better signs promoted the way to Greenhills would have made a difference, while our kids find it even tougher to find casual employment. You just hope more people go there before the gates shut for good.

“When it does all end and I go off and do whatever I do, that will be exciting in itself because that will be the opening of another day,” Meg said. “Who knows what it will bring.

“In the meantime I can go home and say I was responsible for helping families have a great day. Not a lot of people can say that. It’s why Greenhills has always been so special for mum and dad, as it was for Scott. You can see it all in the hard work they left behind.”