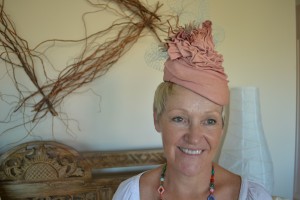 Get excited. The bugler is set to play the traditional Call to the Post to herald the arrival of horses onto the track for the Adelaide Cup at Morphettville Park on Monday, March 10.

Okay, it’s not the Melbourne Cup; some suggest a race that stops a suburb, but let’s still enjoy the holiday first proclaimed by then South Australian Premier Don Dunstan in 1973.

And while the Cup may have lost its Group 1 status, it is nonetheless a huge day on the social calendar. For the ladies, it’s time to glam it up… perhaps a new frock with a matching fascinating hat or just a plain fascinator. Forget the stilettos; a disaster (so they say) walking on the grass.

Suzanne (or Sue) Williams, pictured in her Middleton home office, is definitely one person looking forward to the occasion because she has been busy working on the ageless craft of millinery. If you thought this is old hat, think again; Sue believes the craft is making a big comeback. One could say business is looking up.

After being a craft that was predominantly passed through generations, millinery is now a keenly-sought after course offered by TAFE at its city campus, where Sue completed an 18 month course and Certificate 3 in December. The courses are even more popular and further extended in Melbourne, getting into the area of setting up your own business.

“Of the 25 who enrolled in our course, only seven completed, and I think that was because a lot were not sewers,” Sue said. “I guess I had the advantage because my mum taught me sewing while I was at school.

“My husband Peter and I used to go to the races a lot in Melbourne because his company hosted a table at various race meetings.

I was always sewing my own outfits and going into Spotlight and grabbing a couple of feathers and ready-made hat bases.

“My daughters (Briony and Leah) then started going to the Melbourne Cup with friends so I did the hats for them too.

“Doing millinery wasn’t something that I always wanted to do, but with encouragement from the girls I thought it might be worthwhile checking if there were any formal qualifications available, and Adelaide TAFE was offering the Millinery Certificate.

It taught me so much; the formal side is just all hand-sewing, and that’s where my patience is… I love the fine work.

“Millinery is an art form that’s coming back; definitely. There a few people that know about making hats, and it is very costly so it’s hard to make people understand what you are doing and why the price you are charging.”

Sue has already made an impact on this craft having won first prize in her first attempt at the Royal Adelaide Show last year for a laced sculpture featuring a bird in both the novice section and best in show overall, and now runs her own business, Suzie May Millinery.

“I think the best thing I did was attend a milliners convention in Brisbane last year where milliners from all over Australia were teaching their expertise, some with leather, feathers and birds, lace and silk… there was so much knowledge around, and to spend a whole week there was amazing,” she said.

“The good thing from the Adelaide TAFE course was that the class has stayed in touch, including our tutor, Lorraine Gill. It is a very good support group; we can ask each other for help even though our styles are generally all different.

“Personally, I am more into fantasy hats; the traditional style. Some of us are just into the standard little trilbies, fedoras and classic hats. It’s a matter of working with all the different materials and getting the experience.”

There are probably would-be trackside-socialites wondering what comes first; the hat of the dress?

“A girlfriend of mine buys her hats first and then the outfit to go with it,” Sue said. “But I suggest buy the outfit first so we can then we design the hat around the outfit. It’s easier; the whole dress is inspiring for the hat. You might have a dress with roses all over it or a type of flower and we can do the same in a hat.”

So there you go; look the part in a matching outfit. The fashion stakes will again be a bigger event than the Adelaide Cup itself, and if you doubt that, who won the race last year? Norsqui, of course; we all knew that. CL