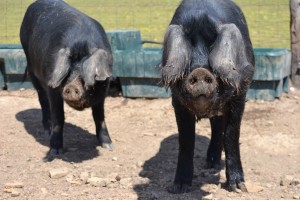 Will Marshall is obsessed with keeping our rare breeds of animals and birds going. It’s not just about still being able to look at them, but solving the mysteries their genetics hold inside.

He has a passion for everything that is rare and breathes. He’s rare himself based on the fact he virtually wants to be so successful in this crusade that it will put him out of a job, perhaps risk sending him broke.

Every long day on his 40 hectare property 2km west of Stokes Bay on the mid-north of Kangaroo Island he tends to his sheep, pigs, poultry and other exotic breeds facing extinction believing he can make a difference in the fight for their breed’s survival.

The place is called Will’s Rare Breeds Farm, which is a must-see spot on the Island’s holiday trail, but the reality is that the tourism factor is a means to an end; it allows him to live his costly dream that his stock will survive as a pure breed, and eventually won’t be rare anymore, hence sending him out of business.

We think of pandas Wang Wang and Funi as members of a rare breed, but Will has Drysdale sheep that are so rare it makes these stars at Adelaide Zoo seem as common a backyard dog.

Will said his obsession to respect animals and birds stemmed to his childhood days on his grandmother’s farm at Moonta. “I was interested in all animals; it didn’t matter if they were domestic or wildlife,” he recalled. “I kept bantams and other breeds of pure-bred poultry, but as a kid I didn’t really pick up the awareness of how many pure breeds were becoming extinct. 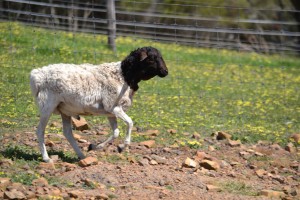 “It really started when I saw an episode of Bourke’s Back Yard on television… they covered a story on a rare breeds farm at Cotswolds in Cheltenham, Gloucestershire, England. They explained the work they were doing with rare breeds and what they wanted to achieve; it was inspiring.

“I knew I wanted to work with animals but I could never put my finger on what it actually was. Normal farming wasn’t it, and neither was being a zookeeper or a vet. That program gave me my direction, and here I am.

“It’s been bit of a weary road. I started with a few poultry breeds and pigs. I ran out of room on my property at Moonta, and the friendships wore thin when I visited people and left a Persian sheep or something else for them to mind.

“Kangaroo Island was the best and most affordable place, so I moved here 11 years ago. The Island has a real conservation mind set, which is also what this is about. Besides, the Island doesn’t have foxes, which is a real plus.”

And as much as Will, with support from his partner Connor Campbell, enjoys the hard work on the farm, the challenges at times have been relentless, none tougher than last July when he was part of the Australian Rare Poultry Importation Syndicate that worked tirelessly on a 10-year project to import 4000 rare imported chickens.

A syndicate of 80 people spent $500,000 on importing 45 breeds from the United Kingdom, only to endure the senseless heartbreak of seeing them all euthanased in quarantine by the Federal Agriculture Department because the only two eggs from the same rare hen returned a positive result to salmonella.

We won’t get into the politics of this mess, but for Will, it was not about the money, but losing the chance to curb illegal importation of poultry. The illegal trade will boom, he warns, and without controlling breeding programs Australia will be at risk.

“The hardest thing to get through peoples’ mind is that a cow is not just a cow, and a sheep is not just a sheep, and so on,” Will said. “Once you start breaking it down into breeds there are genetic differences and the make-ups are unique and irreplaceable.

“If a breed dies out we lose those genes and we can never replace them so genetic diversity is lost. Whatever secrets there are in those genes are also lost.

“We have examples of animals where their genes are very useful in mainstream farming, like the Maasai sheep in East Africa which are renowned for a high resistance to worms or internal parasites, and that is one of the biggest issues in the sheep industry in the world. A lot of research is being done; it is a unique strain of sheep and their genetics will be of some value in the commercial sheep world.

“We have a lot of the breeds here at the farm that are among the rarest in the world, including my Drysdale sheep originally from New Zealand. When they first came to Australia in the mid-70s NZ had about 800,000 of them, and nine years ago we had up to 40,000. Today, there are two flocks in Australia, including mine with six mature-age breeding ewes and one flock in Victoria with 33. NZ no longer has a single registered flock of Drysdales.

“It is a specialist breed with a 40 micron wool, which is basically dead straight and without the crimp of Marino wool, making it absolutely brilliant for making floor rugs or carpet, but not good to wear against the skin. There was only one main buyer for this wool in Australia and NZ, and when it pulled out of the market and left the wool was absolutely worthless. Should we just lose the pure breed for good?

“There is also the Baudin pig here on the Island. Since the big fire (February, 2013) other pigs have moved into their area and diluted the breed. They are now critically rare – fewer than 30, and most are here.

“Some people may say it doesn’t matter, but there is a whole range of reasons why these pigs are so vital, especially when it comes to medical research; they have saved hundreds of thousands of lives, if not millions around the world, and that is because of their genetic uniqueness. There is no other pig like them. There are a range of examples like the Baudins.

“You can relate them to the plant species if you like because they hold all of these secrets to medicinal benefits for us, but until we go and look, research, ask questions and discover the technology we won’t know what is out there.”

Will is hoping that the stories like the Drydale sheep and his Baudins – named after French explorer Nicolas Baudin – will encourage us to share his passion for breeding rare or exotic breeds, and keep the genes alive. If nothing else, discovering the fact there are pigs named after Baudin makes you wonder what the French named after Matthew Flinders.