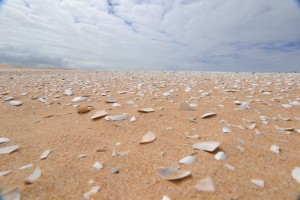 Centred in a 2km-wide peninsula near Cattle Point in our spectacular Coorong lay seemingly millions of cockle shells across drifting sands; evidence of camp sites set by Ngarrindjeri people hundreds of years ago.

Collectively, it is a historical trace of 19 different clans or groups defined or connected by different languages, living from the tip of the Fleurieu Peninsula to Kingston in the South East, and up the Murray River as far as Murray Bridge.

The landscape presents a brilliant, perhaps overwhelming reminder of where we have come from as a nation. With Australia celebrating its Heritage Week from April 12-20, the true beginnings cannot be ignored, and a reminder is daily – on a $50 note bearing an image of a man who was a writer, scientist and in 1909 invented the first shearing clippers which changed the wool industry throughout the world.

Our indelible bond with the Ngarrindjeri people became more obvious several weeks ago during a simple ceremony in the chamber room of the Alexandrina Council to unveil the Letters Patent document, which was authorised by King William IV in 1836.

It may not seem a significant occasion – it failed to draw attendance of other media – but this original document, which will be publicly displayed at the council, is perhaps more emotionally powerful than the general trumpeting we are likely to experience during Australia’s Heritage Week.

The Letters Patent document established the conditions and defined the boundaries for South Australia. They also ensured the rights of ‘any Aboriginal Natives’ or their descendants to land they ‘now actually occupied or enjoyed’.

No one pushed harder for this Letters Patent document to be embraced by all South Australians than another remarkable Ngarrindjeri elder Tom Trevorrow, who sadly passed away last year aged 58, and Mayor Kym McHugh, who unlike some state politicians and other local government organisations identified its relevance in the harmony process.

Among those representing the Ngarrindjeri people at this unveiling ceremony were elder Darrell Sumner, Prof Daryle Rigney, Dean of Indigenous Engagement at Flinders University, Tom’s widow, Ellen, and his sister, Alice. According to Ellen, the ceremony was a reflection of how our different cultures had worked closely and learned along our incredibly challenging personal heritage trail.

Ellen, 59, and Tom had seven children, 15 grandchildren, and three great grandchildren. She was raised by her grandmother, and after living in the fringe Aboriginal camps moved to the Coorong. “I married a Coorong bloke, and I have lived there ever since,” Ellen said. “The Coorong is a special place… the river, the ocean, lakes.”

And, with glee in her eyes, Ellen spoke of her treasured moments as a child sitting at these camp sites covered in cockle shells at Cattle Point.

“I am a basket weaver and my grandmother sat there and did a lot of that around us,” Ellen recalled. “It was a survival style of life.

“We learnt a lot about our culture. My grandmother told a lot of stories… Tom didn’t complete grade six, but he was one of the lucky ones because he also got a lot of the stories from the elders. Amongst his people and the community he became a powerful person. He loved his culture.”

With amazing support from Ellen and Alice, Tom left a magnificent legacy with his work at Camp Coorong, near Meningie, from 1982. According to Ellen, it’s a reconciliation base, bringing people of all backgrounds together and sharing the stories.

“That’s our journey; that’s something we want to continue, and for all of our children to be able to work alongside each other.

“I feel the gap has closed; we (white and Indigenous people) are closer than ever before.

Ngarrindjeri elders have taken their children and grandchildren to the camp sites to share the tradition, and as an example of the warm cooperation of all those involved, we are all able to experience this with guided cruise tours on the Spirit of the Coorong.

Ellen spoke of her young days when the vegetation was much thicker throughout this national park, and the Coorong tour guides Bain Pedler, Dave Bowden and Mat Irvine spoke of how this stretch was once the gateway from Melbourne for the cattle trade and much of the vegetation was trampled. The intrusion dispersed much of the wildlife; obviously a source of food for the Aboriginal people. 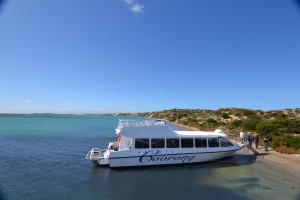 The tour guides stress the importance of being respectful of the camp sites, including a need to walk in single file. On this particular day Mat captured the spirit of survival that was once so prevalent here when he dug arm’s length with his hands and found fresh water sweeter than one would find in Adelaide.

The guides told us facts on the spinifex tumbling across the wind-swept dunes, purple coloured flowers tasting like fruit salad that the Ngarrindjeri people ate and used to heal sores and bites like aloe vera, and especially how they trapped the cockles in nets and lured kangaroos to them at water holes while contending with the snakes and lizards.

The tourists clung to every word, marveled at the spectacular scenery and breathed the culture that hovered over them. They adored the bird life and probably envied the fat seals basking on the beams the other side of Barrage 69.

But above everything, it was the experience of better understanding the culture or tradition of the Ngarrindjeri people, and where we have come from, that was moving. It’s called living our heritage.

For the record, upon taking the throne in 1830 aged 65, King William IV introduced a poor law to relieve poverty, restricted child labour and abolished slavery. He signed the Letters Patent in 1836, and died a year later. It is worth the effort of feeling the King’s passion through the document on the council hall wall, and the spirit of the Ngarrindjeri people along the Coorong. It’s why we call this a special place in South Australia. CL