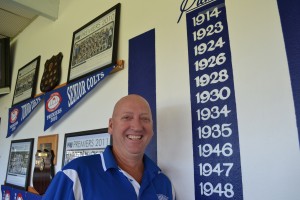 The Kangaroos opened their cheque books and bought players to win eight premierships from 1990-99, including Ross Gibbs, with his son Bryce, now a Carlton champion, causing havoc in the playground. It was an era when the dollar value dropped out of SA league football because of the emergence of the Crows, and fringe players were easily lured to country football.

A few weeks ago a gentleman approached a loyal Victor Harbor FC member in Ocean Street selling raffle tickets to win a new $15,000 Mitsubishi Mirage with the help of the McIlroy Auto Group, and muttered something about the club trying to buy another flag. There was a smile, and man moved on.

VHFC president Grant Levy (pictured), who played 285 games for the club, was part of those halcyon days of the 90s, and understands why people still see not only Victor Harbor, but almost every country football club as having a bottomless pit of money to buy players.

“Those days are long gone,” Grant said, adding: “Forgotten from those days was the club also nurtured a lot of local kids who learned from the big-name recruits and became quality Great Southern Football League players.”

Today the VHFC has a dream, and it wants to share it with the community. The $5 the gentleman paid for the raffle ticket starts with immediate challenges facing the club in the second of its diligently-planned five-year plan, and hopefully leading to an ambitious $1.5 million redevelopment of Victor Harbor’s oval precinct.

It will will see a huge upgrade in facilities to benefit not only the football club, but cricket, netball, tennis and the adjacent Victor Harbor High School.

“It’s about working in cooperation with the community,” Grant said. The project is in its embryonic stage; it is still very much a vision, but as Grant added, something positive for which to strive. The genuine long-term benefits will be developing a sporting hub that will attract families.

The immediate challenge, according to Grant, is getting enough money in the bank. “We need to raise $230,000 to trade and put players out on the park,” he said. “It’s a lot of money when you talk about nine home games of the year when we are trading, and overall for 18 weeks and finals.

“Our footy department gets stretched every year, and you just have to keep working harder.”

The revenue needed to top-up the side with four or five quality recruits comes from other forms of revenue raising. The sponsorship and fundraising dollars largely go into developing the club as part of its long-term plan, retaining its kids, and developing them into future A-grade performers.

“We have a player retention scheme where, instead of paying someone to come down here we are encouraging these talented youngsters to play here by offering them things like gym membership and in some cases petrol money to get back from Adelaide,” Grant said.

“We are putting resources back into our local talent, and the response has been really good. We have had 30 young kids at the local gym through sponsorship, and of course as a club we benefit too because they are bigger and stronger and train harder.

“I am hoping that, in three or four years, instead of getting four or five blokes from town we can just keep this young talent. They will be good enough; my word. We’ve just got to keep them.

“We still have that pathway to play A-grade footy, and I think generally the clubs down here all do it well. It doesn’t really matter whether a kid plays for Victor Harbor, Encounter Bay or Goolwa-Port Elliot, at the end of the day kids need to play footy.”

The biggest challenge facing the VHFC, Grant said, was conveying the message that its priority was promoting a family environment within the club.

“I know we all talk A-grade footy and we want to win an A-grade premiership, but the community set-up with a sporting club in any right is so vital for its existence,” Grant said. “I could not think of anything worse than bringing up my family in a community that didn’t have sport, and to have that it costs money and it takes people.

“We just need to embrace the family environment and make sure that it is safe, friendly and enjoyable. If you have that people will come and help. If you don’t, it becomes a drop-and-run game with the parents leaving their kids here for the day.

“There is no doubt that volunteering is better than it was five or 10 years ago. We are promoted as a family club, and I think all of our families understand they have got to help. It is really appreciated. They are the heart of the club.

“Football clubs aren’t about themselves anymore. From our point of view, we have been encouraged by the support of the community buying raffle tickets and most of all more parents coming out watching their kids play and getting involved.

“There have always been a lot of negatives in football; I guess that is the nature of sport. But we are now also starting to see a lot more positives because we are no longer just the Victor Harbor Football Club; we are a club within a community.”

Of course, football as a sport has always had its issues with everyone sharing their personal opinions. Grant would like to see changes in the juniors to avoid things like a huge three-year gap that turns away kids intimidated by the much older and bigger players, and a workable salary cap process that most believe will never exist.

The fans will never compliment the umpires, who like the players, try their hardest and strive to be better, and someone will always suggest their son should have been picked in the minis forgetting that clubs have rotation systems to give everyone a fair go.

As Grant says, at the end of the day it’s still just a game. What is changing is that football has become a something for the family not just the players, and goes beyond a club winning a premiership to developing a complex for the community. It’s not a mirage; you can win one in the raffle drawn soon. It is a dream that can be a reality if you buy a ticket.