Bill Denny, a director at the Department of Veterans South Australia, summed it up so nicely when he welcomed 20 former RAAF airmen at a special gathering at Hindmarsh Island on Sunday coinciding with the commemoration of the centenary year of the Anzac spirit.

“Everyone who serves this country is a hero,” he told the frail World War II veterans flanked by friends and family. He applauded their service – all with distinction – and later 14 went up in a Tiger Moth organised by the host, Barry Hills, a former Qantas flight engineer, pilot and builder of eight biplanes.

The veterans did their training in a Tiger Moth, so obviously it was a special day for them, kindly funded and presented by the state government Department of Veterans SA through its minister, Zoe Bettison. Well done.

Each story on these brave airmen was special and was delivered with heartfelt gratitude, but among the truly amazing was the survival of Lloyd Leah; a reminder of the perils of war in the face of death.

Lloyd, 90, later recalled that when he was just 18 he left his family’s mixed farm in Kangaroo Flat to do the initial pilot training in Victor Harbor, and then flew Tiger Moths at Parafield. After training in Canada he became a navigator with the RAAF Lancaster 460 Squadron.

“We got hit over Gelsenkirchen trying to knock out an oil refinery; the Germans desperately needed the oil supplies at that stage.

“I had a shell explode under a small table and my legs were shattered with shrapnel. I could see a crewman crouched over dead.

“When I went to get out of the plane, which was on fire, I forgot to put on my oxygen mask and I blacked out as I was being sucked out of the plane through the bombing chute. My parachute handle must have got caught on something; it was the only explanation for me getting out.

“I came down unconscious, and fell through a pine tree. When I woke up I tried to patch up my legs. I looked around, and 100 metres or less there were two German ME 110 fighter planes being refueled and re-armed underneath trees. I started taking off, but I couldn’t get far; I had a broken ankle. My back had been injured too, but it’s surprising what you can do when you have to.

“Someone spotted my parachute and the next minute German Shepherd dogs were after me. I climbed up a pine tree to get away from them, and of course the dogs came straight to me. When the guards arrived I came down, put my hands up and surrendered.

“It was years later that I was told at that stage the Germans had a policy of no prisoners. They shot me through the middle of the neck and missed my spine by a bee’s whisker.

“I was on the ground for a minute or so when one of the guards checked if I was dead. I was still breathing, so they sat there and had a smoke. They were sure I was dead then, so they picked me up and dumped me on the floor of the guardhouse.

“The sergeant in charge called a doctor, which I thought was strange seeing that I was supposed to have been executed. They called an ambulance, and as I was being put in the driver whispered to me: ‘Don’t speak; we’re from the Dutch underground; we’re here to help you’. I was taken to a hospital in Venlo, which turned out to be the headquarters of the Dutch underground movement.

“I was there for 12 days. They had plans to get me out, but they said they didn’t have the medication to keep me alive. The bandage around my neck and legs were like toilet paper; things were pretty rough by that time.

“They said I would be better off with the Germans who had the medical supplies I needed, so I became a POW in a German hospital with guards outside my room. Not all Germans believed in execution of prisoners of war. It was not long after that the war ended.

“I don’t know whether my fellow crewmen got out of the aircraft or were executed, but none survived.

“I still think of the whole experience; the mates I lost on that plane. We had a great crew with three Australians, three British and a Norwegian; all gone. But that was common… the loss ratio in the 460 Squadron at the time was 52 per cent killed, another 20% POWs, and 2% injuries.”

Lloyd’s memories of his ordeal became more vivid in 1989 when he returned to Gelsenkirchen. He wrote to a Dutch newspaper asking whether anyone knew anything about the night he was saved by the underground movement, especially the ambulance driver, so he could thank them.

“Some Dutch people took me to where the plane went down… they had been there before with a metal detector and dug up parts of the aircraft and they presented me with a few pieces. I have them at home, in Aldgate.

“I found a couple of local historians over there who knew all about it, and one told me about the ambulance driver. His name was Jansz. I asked, ‘Is he still alive?’, and the historian told me that not long after the war he migrated to a place called Adelaide. My eyes lit up. And then he told me Jansz died a year earlier (1988).

“I felt so sad, but then I thought of all those who didn’t come back. I would love to catch up with those who did Course 23 at Victor Harbor in 1944 and then went to Parafield flying Tiger Moths. There were 30 of us; we were only 18.

“You never forget, but yes, being here (at Hindmarsh Island) today makes all those memories a lot clearer. It’s like Anzac Day; you remember your mates.”

For the first time in many years the Victor Harbor RSL sub-branch will proudly march down the main streets on Anzac Day rather than the previous Sunday.

Of the 476 platoon members who served in Vietnam, none were killed in action, but 81 have since died and will be honoured during the reunion.

This is the seventh national 86th Transport Platoon reunion since the first in Adelaide in 1999, and organiser Bill Hignett said the support and hand of friendship from the Victor Harbor RSL members and other locals had already been outstanding.

“We prefer to meet and march in the generally smaller towns because they all seem more welcoming,” Bill said. “We have been to Fremantle, Nelson Bay and Geelong in recent years, and everyone is looking forward to their stay in Victor Harbor.”

The group, whose ages range from 64-86, will be here from April 21-27. Victoria has the largest representation.

For the record, the platoon overall travelled about four million miles in Vietnam, with its main duties including taking troops out to operations, offering field support, assisting engineers, ammunition drop-offs and convoys.

If you recognise these guys as members of the 86th Transport Platoon, give ’em a big cheer and shake their hand.

Students start a pilgrimage to Gallipoli 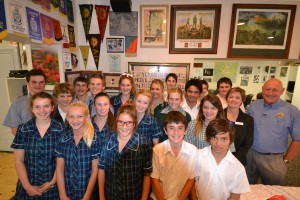 It was 100 years ago on April 25, 1915 that the brave men of the Anzac Corps approached the shores of Gallipoli as part of an invasion fleet, and the spirit of the Anzacs began.

Next year 20 students from Investigator College will be on that west coast beach and what has become the fields of remembrance as part of an incredible life experience.

Their journey to further embrace their clear understanding of the significance of Anzac Day has, in many ways, already began with a visit to the Goolwa RSL sub-branch, where its president Bob Plummer spoke of his personal experiences of war and his own trip to Gallipoli.

Jodie O’Donnell, Investigator College history teacher and tour coordinator, described the tour to commemorate the centenary of the Gallipoli landing as a once in a lifetime event.

“This tour will not only further enhance the understanding of the students who attend it, but provide significant, tangible links for our entire College community as we share and learn from people within the wider community, such as Bob Plummer,” Jodie said.

Students, Chelsea Nunn and Jude Mills said, in a prepared statement from the school: “It is hard to comprehend the enormity of everything that happened at Gallipoli. But what is clear was that we stood up for our mates, we kept going through even the hardest of times, and we never gave up.”

Bob said it was imperative that all young people understood what happened in the past. “I am proud to be able to impart, to youth in particular, the knowledge of what war is, and to give them an understanding of the devastation of war.”