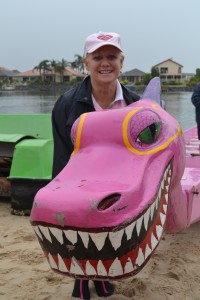 It was the fourth ‘have a try’ day organised by Heather Wehr (pictured right) and Linda Dehle, who first tried to form an official dragon boat club last year as part of their great cause as members of Breast of Friends, a chairable and support group for breast cancer survivors. When there was not enough interest among them, the idea was opened to everyone and so far the response has been terrific.

These hardy oarsmen and women (pictured on the Home page) discovered it’s hard work and great fun, and certainly not Chinese torture.

Heather said the aim of the trials was to guage interest and hopefully form a new dragon boat club with their closest competitors at Goolwa.

The next step is a public meeting to organise the club and officials.

Heather and Linda said they were encouraged by the outstanding support from Dragon Boat SA, especially through John Holland, who brought a dragon boat from Port Adelaide. By coincidence, it was named Carlene’s Dream, after a special lady who lost her battle with cancer, and is painted pink.

“We could not have asked for a more appropriate boat,” Heather said. “This is really special.

“There will be a membership to the club and we will need to pay for a lease of the boat, and do a bit of fundraising. It’s open to everyone. We have had a terrific response so far, and everyone has enjoyed themselves. This is a great way to meet people.”

The dragon boat is 14 metres long without the head and the tail, and ias filled with 20 paddlers, a drummer and a sweep, who steers the boat. The group needs a shed to store the boat in the vicinity of Encounter Bay.

According to John, this is a sport for the whole family. “Dragon boat racing is not like some sports where men dominate because they may be a lot stronger; it’s about timing,” he said. “We have mixed crews and everyone enjoys it.

“The crew that went out this morning did well; with more practice they’ll get it right.”

There seems no doubt they will get hooked on this catching sport with a difference; they had the time of their life.