Why… the big… pause? Because King was born with them 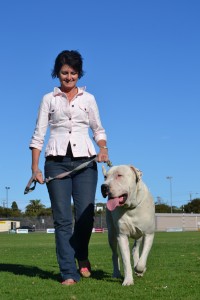 This is no joke…meet King, who is just getting out of the puppy stage.

Angela, who takes King to the Fleurieu Dog Obedience Club at the Victor Harbor Hockey Club fields on Monday nights when she is not working as a theatre nurse, walks King regularly, and is one of many dog-loving owners who would support the RSPCA’s Million Paws Walk program if a new centre was established at Goolwa-Victor Harbor.

The Million Paws Walk concept aims to get 250,000 dogs nationwide to participate, and is the RSPCA’s biggest fundraiser to assist animals of all kinds. It started in Queensland in 1994, and this year’s big event in SA will be held at Bonython Park in the city on Sunday, May 19.

But there are also organised regional walk centres, in Berri, Coober Pedy, Port Augusta and Whyalla-Port Lincoln, and given the fact there are more than 9000 dogs registered among the Alexandrina and Victor Harbor councils, why not set up a Million Paws Walk down here?

The regional fee per dog is $10 before May 10, and $15 the following week, and while it is obviously too late to organise a registered Million Paws Walk club this year there is no reason why our dog lovers cannot also take their pride and joy for a walk around an oval or designated dog park on May 19 and make a donation to the RSPCA.

Angela said she would love to support a Million Paws Walk centre, but obviously with her high-pressure nursing job it is difficult.

David Rumble, an obedience trainer and judge at the Fleurieu Dog Obedience Club, believes a Million Paws Walk would be highly successful because genuine dog owners really care about animals of all kinds. “It would be a wonderful opportunity to support a great organisation,” he said.

David has no doubt there is no dog bigger in this region than King. Some may stand taller, but not as big and solid. “He’s a beautiful dog,” he said. “He works in really well at the club.”

The Fleurieu Dog Obedience Club was forced to leave its Port Elliot Oval headquarters and re-establish at Encounter Bay. The previous central location drew 160 owners-dogs, but numbers have now declined to about 100. If you are interested, ask for David or anyone on the committee at the hockey fields near the round-about on a Monday night from 5.30.

Angela said King loved going to the obedience school, and saw it as a great opportunity for King to work in with other dogs. “It is also about dogs getting used to mixing with other dog owners,” she said. “King has a great temperament and it has a lot has to do with being around other dogs.”

For the record, Angela said King does eat a lot, and is on a controlled diet. The biggest problem she has with him is going to the nearby shopping centre. “It takes me three times the amount of time to walk anywhere because I am continuously stopped by people wanting to talk about King,” she said.

“Most say, ‘oh my god, isn’t he big?’… ‘just look at him, what sort of dog is he?’ King just stands there and gives the biggest look of ‘I’m loving the attention’ that you will ever see.

“I will definitely be taking King for a walk on Million Paws Walk day and make a donation. I really hope someone can get this together for next year.”

If you would care to get together with others and establish a Million Paws Walk in Goolwa-Victor Harbor next year contact us at Coast Lines – we would gladly offer as much support as possible. E: coastlines@internode.on.net