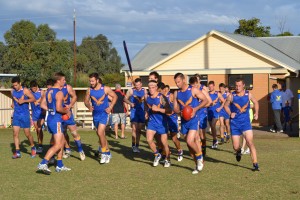 They must have their old club songs wrong – former Crows Ian Perrie and Scott Welsh are living by the Port Adelaide jingle “… we never stop, stop, stop” by showing a new lease of football life for Encounter Bay.

Wearing their old Adelaide guernsey numbers – Perrie 22 and Welsh 17 – the 34-year-olds have displayed glimpses of their brilliant AFL form and been among the key reasons for the Eagles soaring to the top of the ladder in the Great Southern Football League.

After playing alongside each other over eight seasons at Adelaide, the forwards have been in fabulous goalkicking form, but equally important has been their team play – supporting and encouraging their younger teammates at every opportunity. And, with another former Crow forward, Tony Modra, they recently made the extra effort to help Encounter Bay by taking training from the junior colts up – much to the delight of the kids.

Rumours suggest they are being paid a “sqillion”, but that’s an exaggeration. Besides, seeing them after the game you quickly realise they’re putting their heart and soul into the club, and whatever they’re getting paid they’re earning every cent.

Perrie, with an ice pack on his left knee from his 2006 injury with the Crows, said playing down here was just about enjoying footy.

“I came down here because Welshy was here,” Perrie said. “Encounter Bay was the only club I spoke to… I was playing in the amateur league, at Pulteney for four years, which was great, but I just needed a change.

“Coming here has freshened me up. I have met a whole bunch of new guys who are very passionate about their footy. They are committed to the cause and they’re great to be around.

‘It’s hard on the old body. I’m not getting any younger, you know. You get to a stage where you feel you have a few kilometers yet on the body, and you start to enjoy feeling a bit of pain. It makes you feel alive.”

Welsh had a year off from football in 2011 and said he was glad he came back to play for Encounter Bay because they looked after his kids really well while he was out on the field. There in the rooms after the game was his four-year-old son, Sonny – blond hair and a left-foot kick just like his proud dad – and also enjoying a kick outside was Tyler, six, a right-footer.

“I am having the time of my life here,” Welsh said. “I have only got a few more years to play so I’ve got to make the most of my opportunities. I am not getting any younger either.

“I guess a lot of people say we’re getting a lot of money to play for Encounter Bay, but they don’t understand why players want to keep playing the game. I don’t listen to the stories. Footy’s in my blood, and I will play as long as I can; I just love the game, that’s all.”