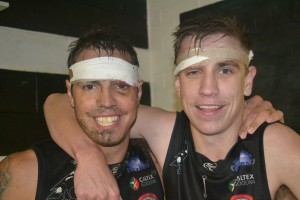 The image right says it all with the Magpies’ Kenn Campbell (left) and Cameron Pearce looking worst for wear with bandages around their head, but it was all smiles after beating the Kangaroos by 33 points.

Despite being rated as a most-likely top-five side pre-season, it was the Magpies’ only third win with five losses, but now there is every chance they will now get their season back on track. They hope to get a big-name recruit in the coming weeks – 2003 Magarey Medallist Brett Ebert, who also played 166 games and kicked 240 goals for Port Adelaide in the AFL.

Ebert, 30, was forced into retirement because of injuries, which have been an on-going issue, was the local Magpies’ team runner the past two rounds.

It was the Magpies’ first win under Daniel Lees, who took over as a player-coach several weeks earlier.

And don’t be surprised if another star comes out of retirement – Tony Modra, who kicked 588 goals (Adelaide 440, Fremantle 148) in 165 games from 1991-2003. He played for Encounter Bay a few years back, and there are suggestions he may return to the Eagles to play “a couple of games”.

Strathalbyn has shown it is the team to beat this season having won seven of its opening eight games, losing only to Goolwa Magpies by one point. The Roosters, who last won a flag in 2010, are a win clear Encounter Bay and Langhorne Creek.

There are no GSFL club games this weekend because of an inter-association match between the GSFL and the Southern Football League at Strathalbyn on Saturday.

The draw in June is: