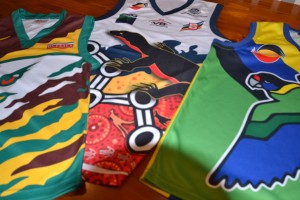 James Stewart would love a dollar for every time someone made comment about having the same name as the American screen and stage legend.

Of course, a lot of younger people may have never heard of the actor come World War II and Vietnam war hero, but just about everyone who lives along the coast, especially in Goolwa, would know of our James.

Walk into the local pub and there is one of his brilliant murals; same story in the snack bar in Cadell Street, the Dollies Lollies Shop further down, and the Whale Centre in Victor Harbor. The closest he’s got to the stage is painting the props for 21 productions put on by the South Coast Choral & Arts Society. He’s also produced amazing paintings, sculptures, designs and work as a signwriter, plus crafted stunning illustrations in 70 children’s books.

And if James Maitland Stewart the actor were still alive he’d probably be wishing he had a nickel for every time someone asked him whether he’s the artistic legend from Downunder.

We deliberately used licence there because our James is as humble as they come. His reputation as one of Adelaide’s finest creative directors and illustrators during his earlier years with advertising agencies would guarantee him of a top job anywhere in Australia. No Hollywood limelight for this bloke. “I just like being myself,” James says. 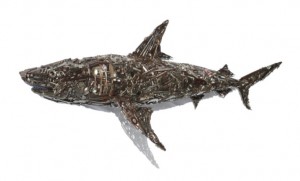 It presents our need to talk about James because, unless the conversation is about his passion for the Port Adelaide Football Club – he redesigned the Magpies’ logo by straightening up the look of the Magpie, and has designed countless work for the Power – you virtually draw a blank. Mention his red Chevrolet Corvette that he changed to right-hand drive, and you’re a chance. A silent achiever, our James, stressing that few would know his past or what he actually does apart from making signs. He likes it that way.

However, walk into his Goolwa home gallery he calls Rustyfish, and where he bases his corporate imaging, design and signage business he calls Catscratch, and you feel that you know all about him from the amazing sculptures.

There are airbrushed helmets, steel shark heads, art created from car parts including a partly-made lounge from and old rear seat, and this amazing shark made from odds ’n ends including nuts ’n bolts and a Mickey Mouse watch. Absolutely brilliant.

Amongst the gems James has created from nothing is a kangaroo made from bicycle parts, which was displayed at Adelaide Airport during the Tour Down Under in January.

The problem, according to James, is that while he loves sculpturing he cannot afford to spend too much time at it because it doesn’t pay the bills like his signwriting and illustrating work.

Perhaps the biggest hidden talent about this guy rests with his other great passion – football.

The role he plays in football around Australia is significant having designed more than 80 guernseys – many for the APY Lands and for Adelaide Crows’ legend Andrew McLeod through his Viv Sports business – and creating West Adelaide’s wolf logo and the Woodville-West Torrens eagle design. One of his guernseys from a few years ago looks remarkably similar to the Crows’ away strip featuring very small crows to form a design; coincidence, of course.

Nearly all of the guernseys for the Australian Football League’s Flying Boomerangs Indigenous community programs have been made from a unique design created by James.

“Designing the guernseys is something that I really enjoy,” James said. “They need to be drawn the old way – by hand – because it would take forever on a computer.

“I started out doing a few guernseys for Andrew McLeod, and after five or six you become the guernsey guy for everyone from all over Australia. They are all unique; the one for the Parrots to go with their yellow socks and bright green shorts certainly was different.”

James’ love for football extends to giving 15 hours week to the local Goolwa-Port Elliot Football Club, including his role as sponsorship director. He lost his chance to play the game at senior level when, as a Year 12 student, he crashed his bike and broke every knuckle on his left hand and wrecked a knee, which he had mended only a few years ago when he felt like he fell to pieces on a tennis court. Fortunately, the injuries have not hampered his artistic skills.

James worked with numerous advertising agencies, especially Them for many years. “I got sick of communicating, so 13 years ago I added a bit of signage to my own business,” he said.

“I guess it all started when I worked with my dad, who was a spray painter. I also did a lot of airbrushing in the 70s when it really started before I did commercial art. That led to becoming a graphic designer, illustrator and art director before basing myself back here in Goolwa.”

The challenges have also varied too. James has airbrushed numerous guitars, with one payment including a Fender guitar which he plays with passion. It brings out the 60s and 70s in him. He also plays the piano, and this other passion led to him designing 80 music books.

“A friend of mine, Gary Turner, repackaged ‘how to play’ music books, and instead of having a Spanish guy with his foot on the stool we put Mick Jaggar on the cover.” Gary is now a multi-millionaire living in Malta.

As mentioned, James doesn’t like talking a lot about himself or his achievements. On a mild autumn day he’s quite content painting the name on a wooden boat by hand or making a raptor in the gallery to sit alongside a parrot made from a spanner and left over pieces of steel.

“It’s what I do,” James said. “I just hope people enjoy it.” They must. People often leave old wooden crates filled with rusted bolts and whatever – collectively called junk – at his back gate, and somehow he turns it into treasure.

Look around; you will see a lot of James work in studios, and on any given summer Thursday night you’ll see him playing bowls at night owls, which confirms he’s not brilliant at everything.

And for the movie buffs old enough to know the actor, it will be 80 years ago this June that Jimmy Stewart starred in his first-ever movie… playing the role as an artist in Art Trouble.