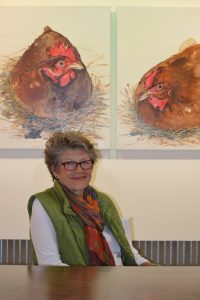 It hasn’t attracted the same media frenzy as when South Australia lost the Formula 1 Australian Grand Prix, or upset the rank and file like it did when Adelaide’s iconic pie cart was towed away from the front of the GPO in Franklin Street, but in our far more civil regional art world it is nonetheless significant.
The Fleurieu Art Prize has been relocated from its home in McLaren Vale and across the Fleurieu Peninsula to the Anne & Gordon Samstag Museum of Art in the City West campus of the University of South Australia.
Since its establishment by artist David Dridan, vigneron Greg Trott and businessman Tony Parkinson with the support of major wineries in 1998, the Fleurieu Art Prize has been one of the most remarkable art events of its kind simply because it carries the world’s richest landscape art prize – a staggering $65,000. And now it’s gone from here.
However, with the ninth Fleurieu Art Prize launched tomorrow and the exhibition open til July 29, there is no resentment but immense satisfaction, indeed pride that this region could create such a stunning event from virtually nothing with a simple aim of promoting McLaren Vale and the region.
It has been an astonishing success story by small yet incredibly devloted committees and supporters, and now a new committee of four men who were then joined by their wives at their meetings are putting the same energy into another art prize – the $10,000 Fleurieu Food + Wine Art Prize. A non-acquisitive painting prize, the short-listed final entries will be displayed around nine participating wineries from Saturday until July 29.
In other words, a group of special people in the Fleurieu region are taking this art prize to a whole new level on the same early path as the Fleurieu Art Prize, and in the process have created some incredibly-deserving opportunities for so many artists to expose their amazing talent.
According to Jen Wright (pictured right), the Food + Wine Art Prize coordinator, it was a compliment to shift the Fleurieu Art Prize to the Anne & Gordon Samstag Museum of Art. “The space there is prestigious and influential; it’s beautiful, stunning actually, and they thought this would raise the profile of the Fleurieu Art Prize,” she said.
“In the meantime, the board and locals felt there had to be a component remaining on the Fleurieu and further developed this component, the Food + Wine Art Prize.
“We have had it twice before, and this time the local community will run it. The Onkaparinga Council has been really generous and so has the James and Diana Ramsay Foundation.”
The incredible thing is, that while the world’s richest art prize has been taken from us, the promotion of this Food + Wine Art Prize has probably already far surpassed that of its richer predecessor. Jan concedes that with the last Fleurieu Art Prize the awareness was minor.
The key factor is that more than ever art across the Fleurieu is being promoted incredibly well through brilliant social networking, and according to Jen it has added a bright new dimension to this field.
“Some people say it’s not like the old days when people our age promoted art, and they’re right,” Jen said. “ It’s better. Today we can enjoy a wider reach.
“Carol Banman, who has taken over our social media Facebook stuff, has been amazing. She told me that no one looks at websites anymore, and I thought, what? That’s her opinion, but others are saying it too. Gee, I’ve missed a whole era of electronic media (she laughs).
“For whatever reason art has generally been perceived as an older person’s domain, probably because the finest artists of note are older, but today’s younger generations, good people like Dana Kinter, who is a machine on social media, have done so much more to reach the world outside of art. They truly are amazing.
“The profile of the food and wine section now has the potential to go another step; it’s exciting. The artists had to embrace any component of food and wine; it could be a vineyard, a landscape, and there were quite a few still-life paintings entered.”
It is interesting that Robert Hanaford won the first Fleurieu Art Prize in 1998, and now his daughter, Tsering Saring Hanaford, and his wife Alison Mitchell, have stunning final entries in the Food + Wine Art Prize.
The finalists will have their work exhibited across nine venues in McLaren Vale to celebrate community art, food and wine of the region. It will take 50 fabulous volunteers to make this happen, so please visit the venues. But then, you probably know all of this through social media.